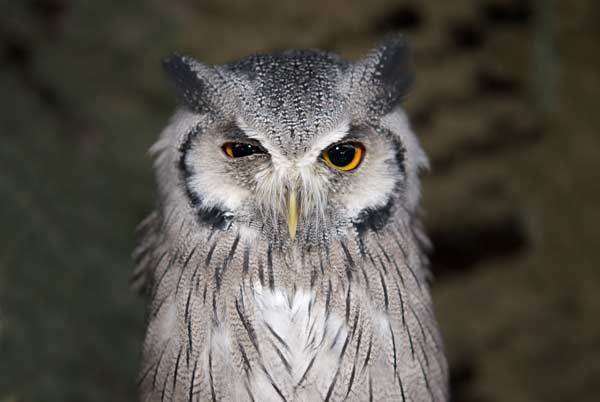 We took this photograph of a Scops Owl at a bird sanctuary here in England.

Since then we have learned something very interesting about the way that owls hear sounds.

We humans are exceptionally good at detecting the direction from which a sound originates.

We are actually better at it that almost any other mammal, or indeed any other animal.

We detect the direction of high-pitched sounds (those with very short wavelengths) by the difference in the intensity of the sound in each ear.

That is because short wavelengths are easily blocked by our bodies and our heads. Therefore less sound reaches the ear that is further from where the sound originated.

We detect the direction of low-pitched sounds differently.

Because of their long wavelengths, low-pitched sounds work their way around our heads with scarcely any interruption.

The intensity of these sounds is therefore the same in each ear but we can tell the direction from which the sound came because of the slightly longer time it takes for the sound to reach the ear that is further from the sound.

What we humans are not so good at is telling whether the place where the sound originated is higher or lower than us, or whether it is at the same level.

Owls Can Detect The Elevation Of Sounds

Owls are better than we are at detecting the elevation of sounds. In other words, they can tell whether a sound is coming from somewhere high up or low down with much greater precision than we can.

That is because owls have one ear slightly higher than the other. It's not easy to see that, however, because their ears are hidden under tufts of feathers.

It is thanks to their asymmetric ears In that way owls can triangulate and pinpoint sounds.

Which might explain why this Scops Owl's face looks slightly lopsided.

It might also explain why we tilt our heads to one side when we are trying to locate some sounds. Perhaps we are unconsciously putting one ear higher than the other to help triangulate the position of the sound.