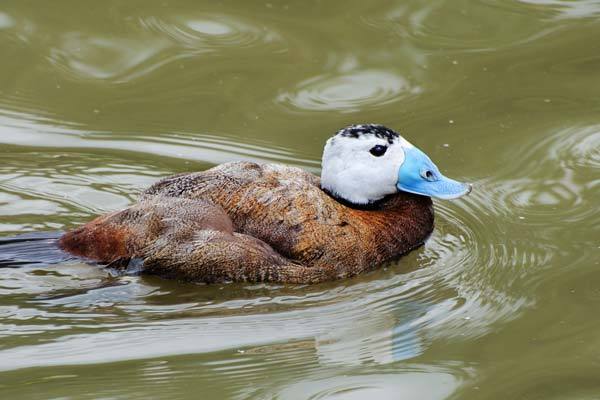 Some ducks dabble by up-ending with there heads under the surface of the water and their bottoms sticking up vertically out of the water.

From that position they can get on with the important task of chomping on the weeds growing under the water. Plainly though, that limits them to plants that grow in the shallows - and so other species of ducks are adapted to dive far below the surface to feed.

The White-headed duck is a diving duck - one of several species in the family of stiff-tailed diving ducks - and he uses his stiff tail to propel himself down into the water to feed.

He can dive more than 30 feet (10 metres) and he feeds on seeds and insect larvae.

He has a gland in his nose that can extract salt, so he can live in saline lakes - from Southern Europe and North Africa all the way across to Central Asia.

He swims nervously on the surface of the water - with his stiff tail straight out behind him. As he swims he changes direction all the time. Given the threats to his habitat, it's not surprising.

He is on the endangered list because of habitat destruction and because he now has to compete with an introduced species - the Ruddy duck - which is edging him out.