The Forth Rail Bridge 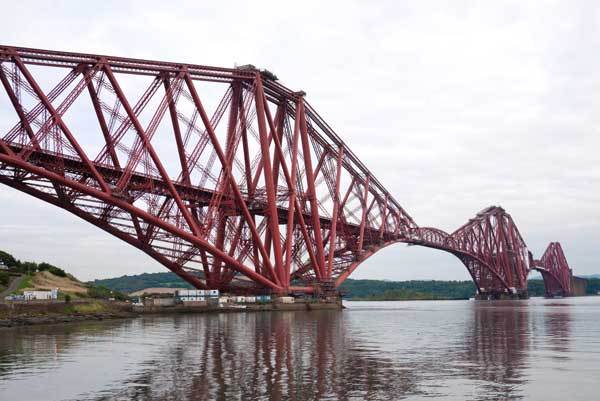 In 1879 the Tay bridge over the Firth of Tay collapsed taking a train and its passengers down into the tidal river.

It was because of the Tay Bridge Disaster, as it is known, that the new rail bridge over the Forth estuary was built not only to be strong but to look strong.

In this way, the engineers hoped to reassure the public that the new iron bridge over the River Forth was safe.

The bridge crosses the Firth of Forth just north of Edinburgh and is over two and one half kilometres (one and one half miles) long.

It uses the balanced cantilever principle, which means that two cantilevered stretches hold up the central section.

Today the bridge carries heavy rail traffic all year round, so the engineers' faith in the construction of the Forth Rail Bridge was justified.

A popular saying it Britain is 'It's like painting the Forth Bridge', which means that something is a never-ending task.

That is because the surface of the bridge is so great (almost half a million square metres or four and one half million square feet) and it takes so long to paint, that painters have to begin the job again as soon as they have finished.