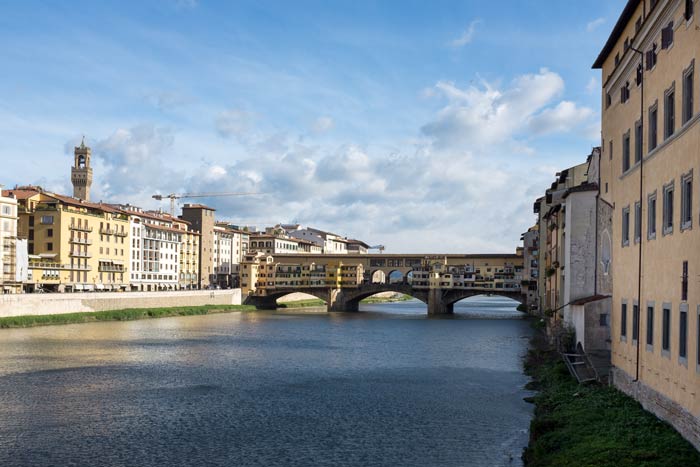 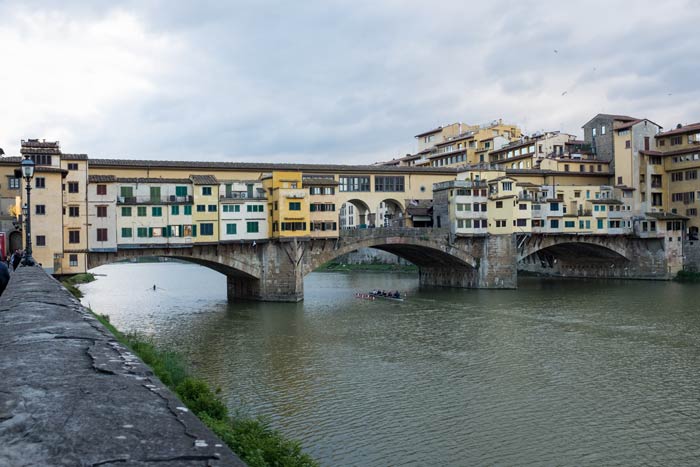 This is the famous Ponte Vecchio that spans the River Arno in Florence. It is lined on both sides with shops selling gold jewellery and expensive watches.

The guide books say that there were once butchers’ shops on the bridge. Then they were ousted to make way for the gold sellers because gold sales meant higher tax revenues for the then King.

The next photo here is of a gold shop on the Ponte Vecchio in the early morning before opening time.

Some of the shops have intricate cantilevered wooden covers. Get there early enough and you can see them open like the jaws of some mythical animal. 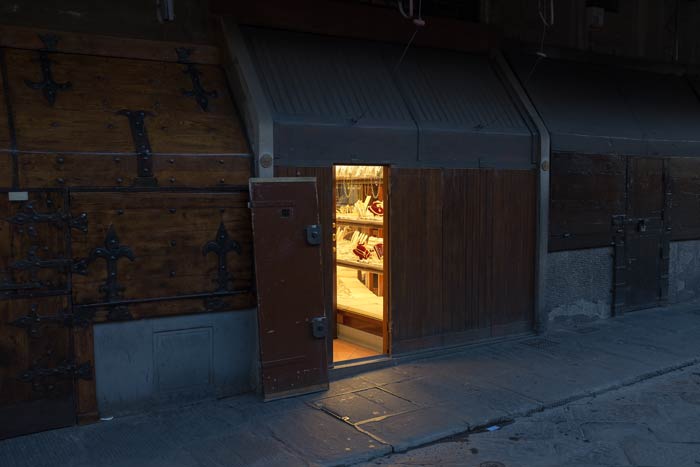 You would think that Florence would be quieter in late November and early December, wouldn’t you? Or maybe not. In fact it is busy with tourists and others. The ‘others’ were the people who came into the city to watch the marathon. Here is a photo the runners coming onto the Ponte Vecchio past the crowds.

And here is a slow-motion video that we made of the runners coming onto the Ponte Santa Trinita. It’s the next bridge down river from the Ponte Vecchio.

The Ponte Santa Trinita and it is a lovely bridge in its own right. It’s made of rich, brown stone and it curves gracefully.

It is also a good viewpoint from which to look at the Ponte Vecchio and the hills behind:

And there is a national religious holiday in early December, so Florence was full of Italian tourists. They were taking advantage of the day to add another day to it and tag it onto the weekend.

From the voices we heard on the street, Florence is at least as popular with Italians as it is with people from other countries.

With that introduction, here are some observations from us:

Italians, both men and women, are very well dressed, and they dress elegantly.

From the variety of fashions on the street, it is clear that when they buy they have lots of choice.

At the same time, we don’t get the idea that Italy is overflowing with money for public services. The Uffizi is in good condition, but some other museums are musty and run down.

You might say that personal adornment takes precedence over money for public spending. 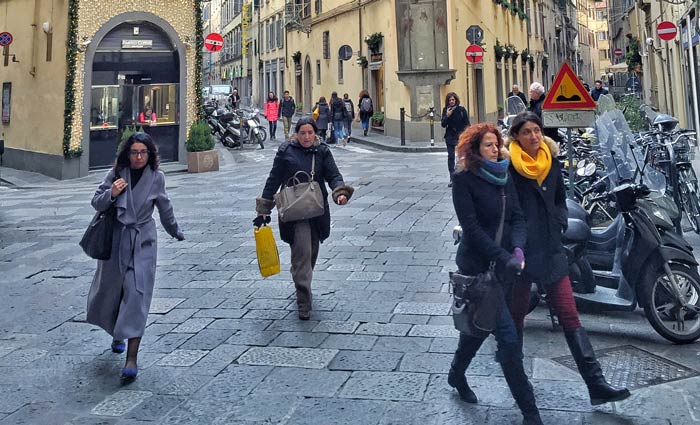 We saw several women wearing full-length fur coats. The coats were top quality and in very good condition – a real fashion item. We could not imagine someone walking about the streets of London like that. They would soon be daubed with red paint signifying the blood of the poor animal that lost its life to make the coat.

This photo is not one of the best examples of a fur coat gracing a woman on the street, but it’s one we managed to grab before the scene disappeared. 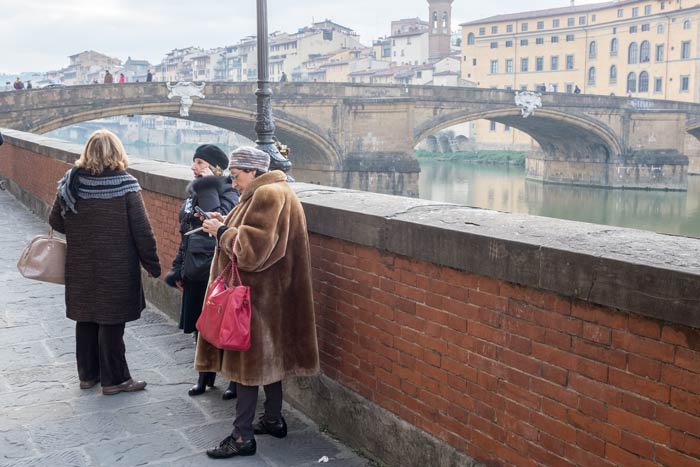 As pedestrians they are casual about traffic. They stand ‘almost’ on the pavement/sidewalk, oblivious to the nearness of passing cars. It is important to say that they do not do so in a haughty way. It seems, rather, as though years of being exposed to the nearness of traffic has made them casual and relaxed. From what we saw, it made them relaxed to the point of forgetting about it.

The story of Pinocchio is set in what is described as a small village near Florence. Accordingly, the people have Florence have taken him to heart. You can find him in every shop, in all sizes.

And for what might be the most authentic and lovely experience of Pinocchio, visit Guilio Giannini e Figlio, the shop in the Piazza del Pitti and talk to the owner as Tamara did. That is where we learned that in Pinocchio’s days, boys wore black uniforms with white collars – as you can see here. 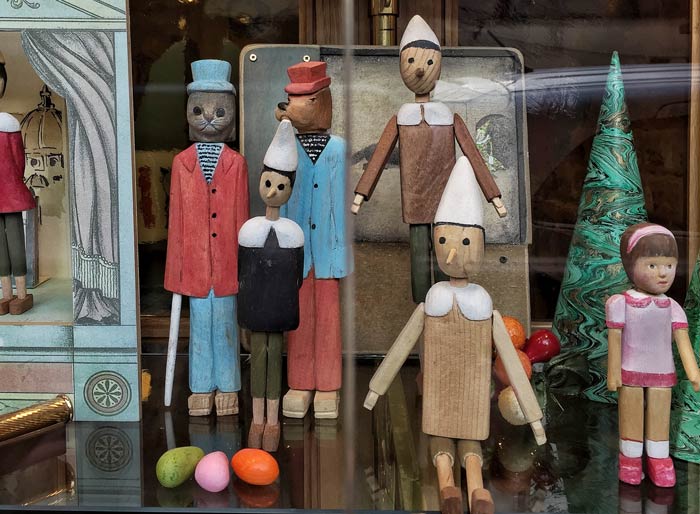 And take a look outside the shop at the small plaque on the wall above the door at the end of the building. The novelist Fyodor Dostoyevsky lived in the apartments there, shortly after he married for the second time.

As David was reading Dostoyevsky’s The Brothers Karamazov when we were in Florence, it was especially lovely to spot the plaque. (David is still reading the book; it’s a big book.) 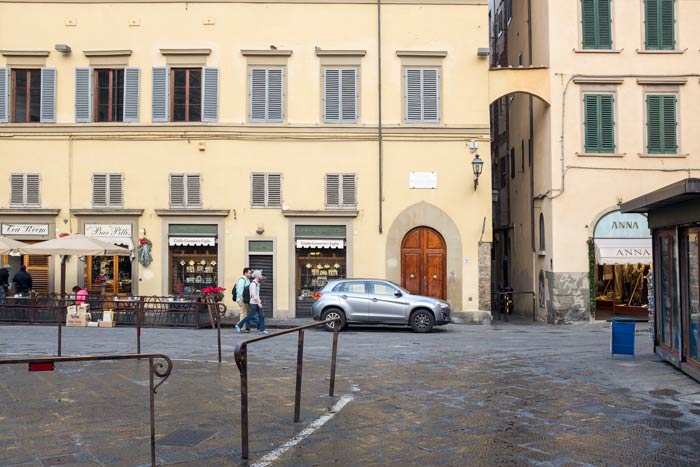 Dogs are very popular. Coming from Edinburgh (a dog city par excellence) we notice when there are dogs on the street. In Florence there are lots of dogs, with the majority of them being Jack Russell dogs. Tamara says there must be a local puppy mill churning them out.

On a side note, we saw a dog in a neighbouring town and could not identify the breed. We approached the owners and tried to ask what it was. The reply was ‘Pepe’.

It took a few moments of dawning confusion melting into comprehension for the owners and we to realise that this was the name of the dog and not the breed. It was in fact an Irish Terrier – and gorgeous.

Back to Florence, or rather the Italian language. There are so many words that are similar to English or French words that it is easy to ‘almost’ understand some sentences. One exception was ‘spingere’ (meaning ‘push’) and pronounced spin-jer-i. It is written on every shop door.

Where does the word come from? A friend in Canada asked a friend she knows. The reply was that spingere comes from a word meaning extinguished. Very strange.

Ice cream is everywhere – stacked in mountains in the display cases. Cakes are everywhere – long lines of wonderful cakes and pastries. Pizza is everywhere. For anything else, you have to hunt.

And ask for ‘just a glass of tap water, thank you’ in a restaurant and you would think that all the taps in Italy had been stolen. 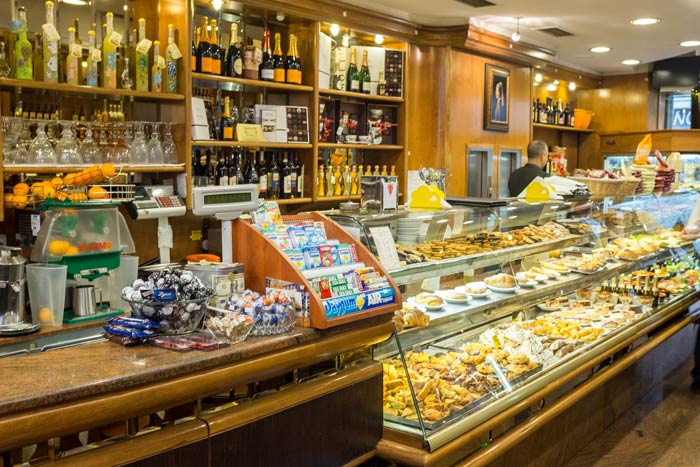 This is the cafe just around the corner from where we stayed. It would have been entirely possible to spend all of our two weeks in Italy sampling the variety of pastries and then rolling out of the door to the airport.

No experience of Florence would be complete without seeing the Duomo. Its full name is the Cathedral of St Mary of the Flowers (Cattedrale di Santa Maria del Fiore) and it was built over a 150-year period beginning in 1296.

The building stands – an impossibility of white marble in a Square hardly big enough to hold it. The bell tower stands to one side -a separate building not attached to the church.

The inside is bare – bare walls with hardly any adornment – in complete contrast to the exterior. 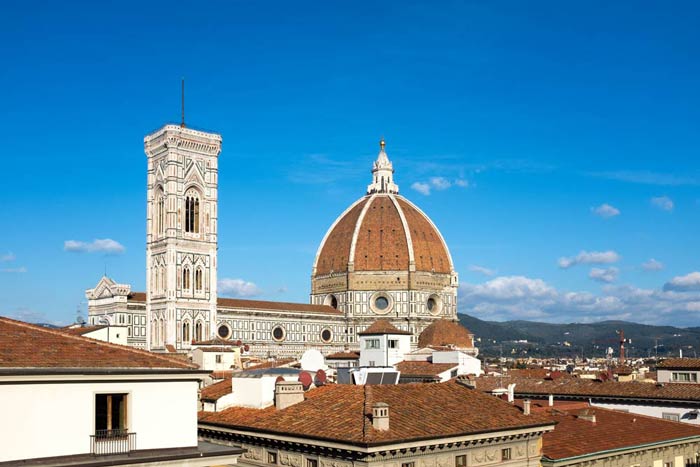 And across from the church – a literal stone’s throw away, is the octagonal baptistry. 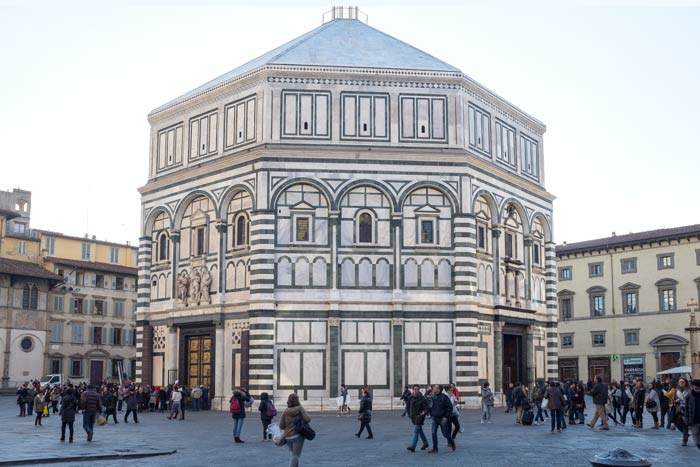 The Duomo feels like the centre of Florence, and to explore the city on foot, we recommend following the streets that radiate out from the rear of the church. Those heading towards the east are worth exploring to find different parts of the city.

When you are standing in the Square, give a thought to 1966 when the flood waters were almost six feet deep in the streets. Look at the buildings facing the Campanile side of the Duomo. On the wall of one of them there is a scribed line to indicate the level of the flood waters. 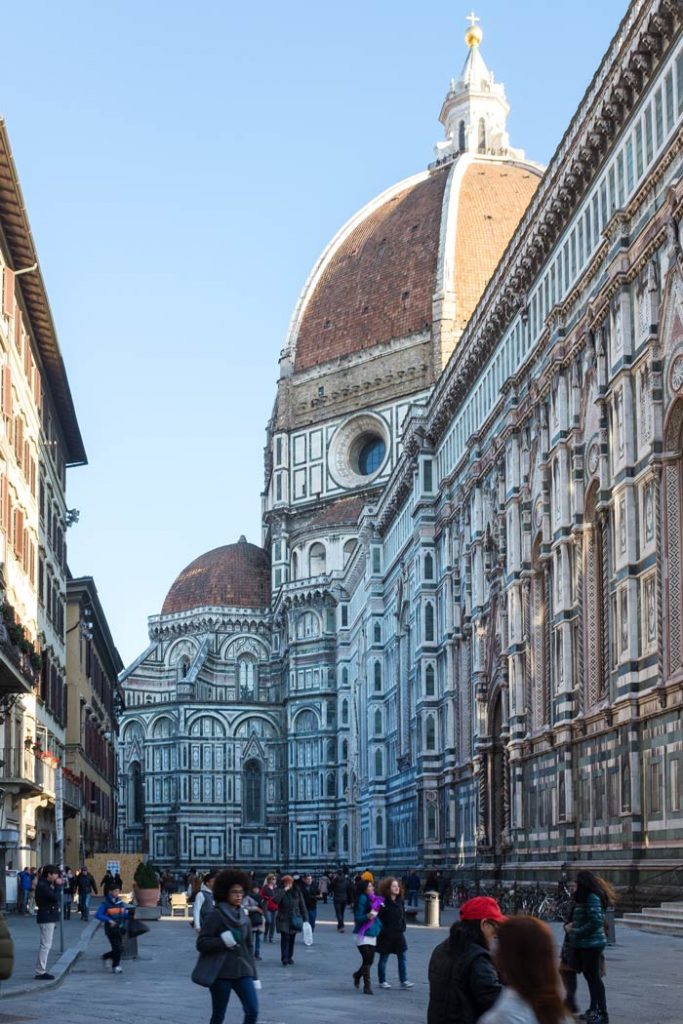 One motif keeps coming back and that is the glimpses of the Duomo that one sees down streets and alleys as one walks around Florence. This is outside Grom, who make wonderful ice cream.

David takes this opportunity to thank Tamara for finding Grom in the Guidebook and steering the two of them there. 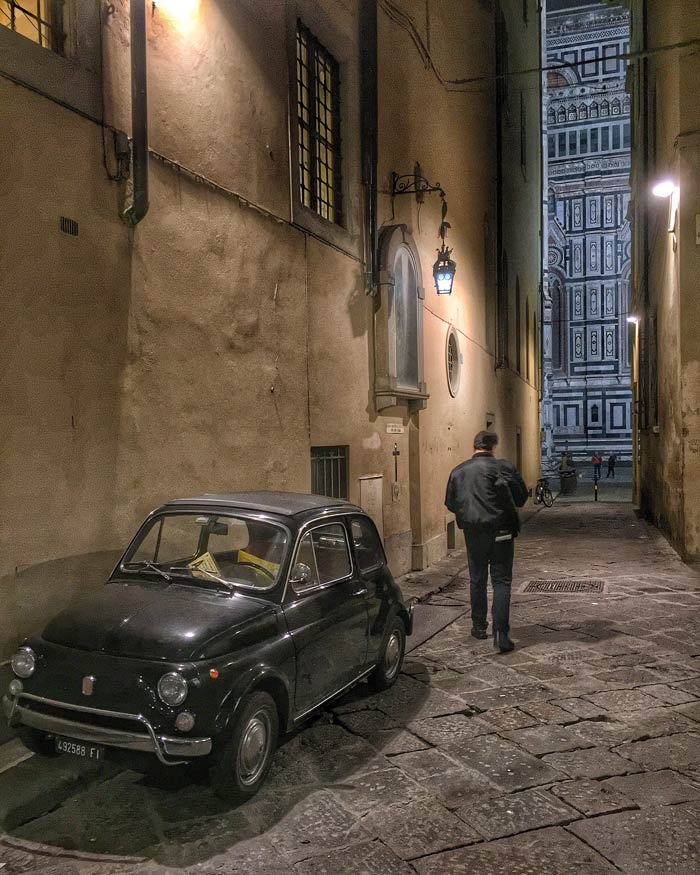 Note: More posts from Italy to follow over the next few days