Their Breeding Grounds and Appearance
Mandarin ducks breed in densely wooded areas near shallow lakes, marshes or ponds. They roost high in trees and nest in tree hollows found near bodies of water in eastern Siberia in Russia, China, and Japan. During the winter, they migrate to southern China and Japan. 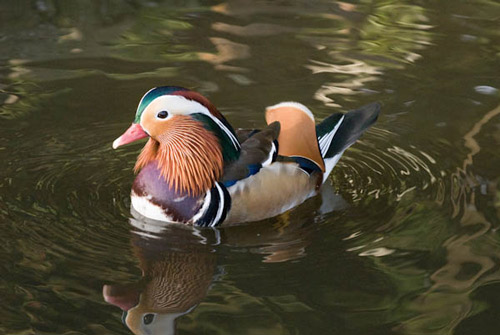 The male mandarin (also known as a ‘drake’ as all male ducks are called) like the one pictured here has very colorful markings.

The female mandarin looks very different with feathers that are a mixture of pale colors and speckles of greys, browns, and whites. Her coloring serves as important camoflage against predators during the mating season.

Their American Relative
The mandarin duck is a close relative of the North American wood duck.

In fact, the two species are the only two members of the genus ‘Aix’ — the Mandarin being ‘Aix galericulata’ and the Wood Duck being ‘Aix sponsa’.

Monogamous and Admired in the Far East
Thought to be monogamous, mandarin ducks have been revered in Far Eastern culture since at least the fifth century. Praised for their ornate beauty, they are often found in art, poetry, and other forms of Oriental literature as a symbol of marital fidelity and emblematic of conjugal affection and fidelity.

Related Chinese and Japanese Proverbs and Traditions
The Chinese language use the proverb translated as “two mandarin ducks playing in water” as a metaphor for a loving couple. The Mandarin Duck symbol is also used in Chinese weddings since they symbolize wedded bliss.

Similarly in Japan in the past, pairs of mandarin ducks were often presented as wedding gifts to Japanese newly-weds.

An Homage from Hiroshige
An example of the depiction of mandarin ducks in Asian art can be found in one of the kacho-e (i.e., prints depicting birds and flowers) masterpieces created by the esteemed Japanese artist Utagawa Hiroshige who lived 1797 to 1858.

Translated from the Japanese, Hiroshige characterizes what happens in a tumultuous setting in nature between the otherwise normally bonded and loyal mandarin ducks:

The drake almost dies of grief for his mate who is alone and foresaken on her nest, but two of the lord’s servants who respect and love animals and nature bring the creatures back together.

Although the servants find true love in one another through their virtuous deed, they put their lives at risk by helping out the beautiful mandarin duck.

All ends happily in the end, however, as the grateful bird and his mate manage to successfully save them.

A beautiful version of this legend for children was published in the 1990s. Using the same title and retold by Katherine Paterson in English, it also features color illustrations by Leo and Diane Dillon created in the style of eighteenth-century Japanese woodcuts.

Worrying Population Decline
The current reality and fate of the mandarin duck is not nearly as heartwarming as the end of that timeless fable, however.

This is because according to recent research reported by the UK’s Wildfowl and Wetlands Trust (WWT), numbers of mandarin ducks in their native Far East have declined from their former great numbers due to habitat destruction (mainly logging) and over-hunting to the present-day small wild populations of mandarin ducks which are under government protection in China, Japan, and Russia.

Including a feral, free-flying population of 7,000 birds in the UK, estimates put the total world-wide population of wild mandarin ducks today at around 80,000 birds.