The nearer one gets to the North and South Poles, the quicker it gets lighter, day by day, as winter turns to spring.

The furthest north I have ever lived is in the middle of Finland at 61°, and spring arrives there so quickly that the buds on the trees can burst and open fully in a day.

This accelerated growth is needed because the plants and trees have to cram everything into a short season, before the sun retreats towards the other Pole.

But in part it is because of the rapid increase in the length of the day as the sun moves further away from the equator, and heads towards the tropic of Cancer with its light galloping north around the curve of the Earth at an ever-increasing rate.

It is as though the light has climbed up the steep slope leading from the equator, and now it is speeding across the easy slope towards the top of the world.

There is something of that in every curve. In one direction it is an easy downhill ski slope, becoming steeper as it progresses. Looked at the other way, it is like a tough climb that tops out in an easy clamber over a grassy slope.

Now that the days are already becoming lighter, things look brighter. In the depths of winter here in Leeds at 52° north however, it seemed just a couple of short weeks ago that the dreary darkness would last forever.

When it snowed, it brightened up the landscape. Not that you can tell that in the following shot when the snow was still coming down in the half-light of a late afternoon in Roundhay Park.

But now in later February the ducks are looking their very best with bright new feathers. They are congregating and showing off, ready for the breeding season – as is this widgeon. 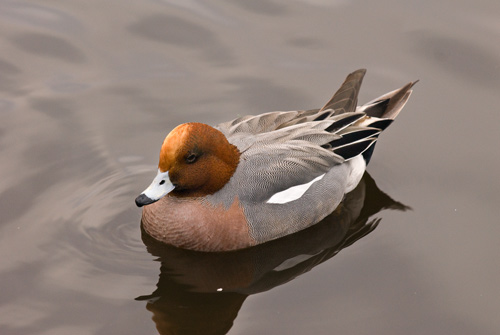