William Blake, poet, visionary, painter, and printer, moved from London at the age of forty three to a cottage in the village of Felpham outside Chichester on the south coast of England.

By train today it takes approximately two hours to travel from Chichester to London. The journey is made slightly longer than it otherwise might because of the route the rail line takes to navigate the river that runs to the sea to the east of Chichester.

In Blake’s day, Chichester must have been the best part of a day’s travel from London. 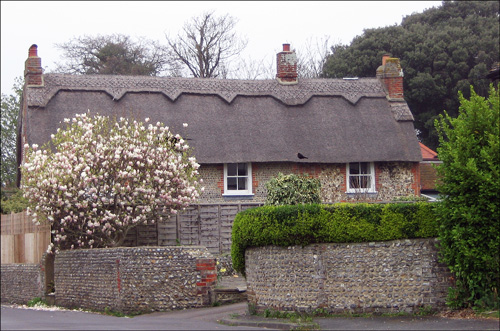 Blake was born in 1757 in Soho in the heart of London, and except for his four years in Felpham lived in London all his life.

Blake Develops the Printing Technique of Relief Etching
As an artist he is, of course, known for the way his powerful visual imagination shone through his utopian vision. What is less well known is that in the late 1780s he developed his own printing technique known as relief etching – a technique that subsequently became important in commercial printing.

Unlike most engraving techniques that create the image by filling the page with the engraver’s marks, Blake’s method left large areas of the paper untouched, to be subsequently hand-colored. It involved an etching process that etched away the majority of the plate, leaving the parts to be inked standing proud, or in relief – hence ‘relief etching’. And Blake and his wife hand-colored the prints.

In the early 1780s Blake’s work had attracted the attention of one of the founders of the National Gallery. Blake’s reputation increased and he opened a print shop and began working with the publisher Joseph Johnson.

Social Justice
Blake was a well-known supporter of social justice and that included the right of women to take a full and equal place in marriage and in society.

So it was only natural that he met and mixed with some of the leading intellectual dissidents of the period, from Thomas Paine to John Henry Fuseli to William Wordsworth, all of whom met at Joseph Johnson’s house.

Felpham
But in 1800 Blake moved to Felpham, a small village in Sussex, far away geographically and in its ambience from the intellectual stimulus of the people he had mixed with in London. He began work on illustrations for Ballads founded on Anecdotes of Animals by Wiliam Hayley of Chichester and worked on his own poem Milton.

Sedition
Then in 1803 Blake was tried in Chichester Assizes for sedition – for uttering words aimed at upsetting the established order. He had found a soldier relieving himself in his garden, and was charged with making seditious remarks about the King and the army. In the event, he was acquitted, principally on the unreliability of the testimony of the soldier.

What motivated Blake to exchange London for a rural existence in the first place? Did he go to Sussex only to work on the illustrations for Hayley’s book? Could he not have worked with Hayley at a distance, traveling to meetings when needed?

Felpham is pretty, even today. And it’s easy to see how Blake would have liked the rural scenery. What is less clear is why he would have left the intellectual stimulation of his friends in London. In any event, within a year of his acquittal Blake returned to London to live, and stayed there until his death in 1827 at the age of seventy.

Chichester Assizes court was housed in one of the buildings that formerly formed part of the Priory that dated back to the early Medieval period. Today the building is empty save for a few museum pieces and sits atmospherically in a park in the center of Chichester.

Check out the ecards featuring our photographs here at Quillcards.