A ‘Bubo Bubo’ Named Boo
The Eurasian Eagle Owl is known as ‘bubo bubo’ in Latin, hence the name of Boo for a female of the species whom we met this past weekend at the Wildfowl and Wetlands Trust (WWT) Martin Mere wetland center in Lancashire, England.

As you can see from these front and side views, Boo is a regal creature: 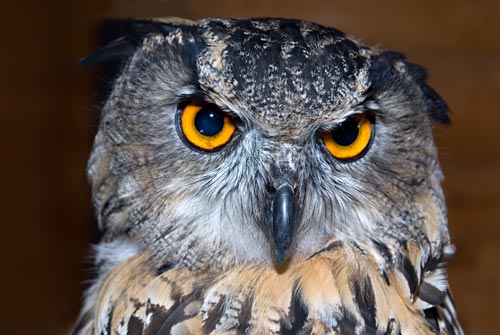 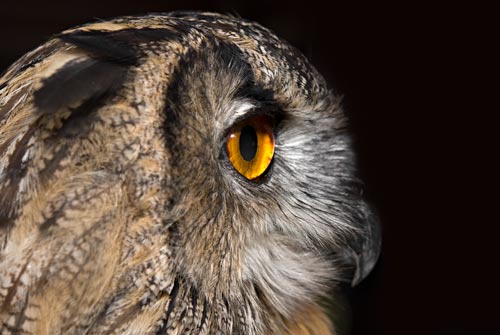 Boo’s Story
Boo originally hails from Finland. She’s 20 years old, and she has been under the kind and knowledgeable care of the Corio Raptor Care and Rehabilitation for the past 16 years. Staffed solely by volunteers, this organization rehabilitated her after her owner abandoned her with a severely broken wing.

As one of her carers noted, there are ways that people can buy these birds as pets although of course they are not suitable as domestic pets.

Judging by how calm and collected Boo was when a crowd of us petted her in turn, however, hopefully her memories of the abuse she suffered are now in the past.

Jeepers Creepers, Where’d You Get Those Peepers?
As Boo stared at me with her wild golden eyes and huge irises that reminds one of the creatures in animated Disney fairytales, she seemed completely unfazed by all the attention that her startling beauty prompted in the crowd.

Helping People With Special Needs
Such behavior triggered me to ask her carer if it did not in fact bother her to have so many strangers stroke her.

It turns out that Boo loves the attention and she is used to it because she is taken regularly to a school for special needs in Liverpool where everyone gets the chance to interact with her.

She Can’t See For Miles and Miles…
Looking at a massive raptor like Boo, I figured that she would have fabulous eyesight to see for miles when scouting for prey.

However, her carer explained to me that that stereotype is false: Like all Eurasian eagle owls who are largely nocturnal raptors (that is, raptors who are active during the nighttime), Boo’s long-distance vision is actually very similar to that of humans.

The Diurnal Raptor’s Gift
It is only diurnal raptors (that is, raptors who are active during the day) who can spot prey like a rabbit on the move from up to three miles away.

Eurasian Eagle Owls have far fewer cones in their eyes than we humans do, so these owls can only see primary colors.

With far more rods, however, what Eurasian Eagle Owls like Boo do have in spades compared to humans is extreme sensitivity to light.

Boo’s Buddies
Here are two of Boo’s friends who were also at the exhibit this past weekend. I didn’t get the chance to find out why and how they ended up in care at the rehabilitation center, but I was able to make note of their breeds: The first is a White-Faced Scops Owl, and the second is a Little Owl.

As you can see, along with Boo they made a magnificent and memorable trio.