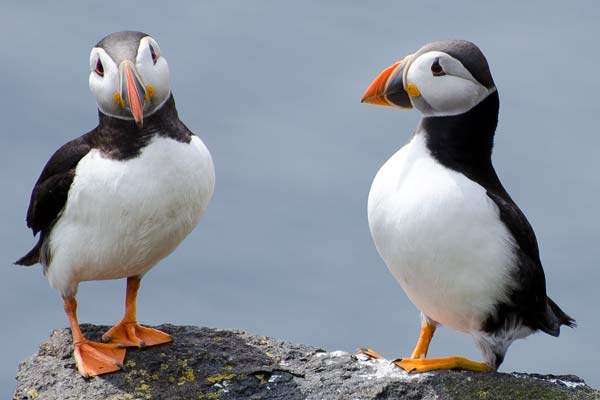 If you like these photos we took of puffins, check out our Quillcards Puffin ecards.

In Pursuit Of Puffins

It took not one but two specially dedicated bird trips until my husband David and I saw hundreds if not thousands of puffins – in the air, on the land, in the water, standing on cliff tops, hanging out in droves on top of rooftops – anywhere we looked that day in late June this year, we saw these cuties.

Known as ‘clowns of the sea’ and ‘sea parrots,’ Atlantic puffins are the species of puffin one sees here in Scotland.

They are the sole species featured in our photographs in this article. 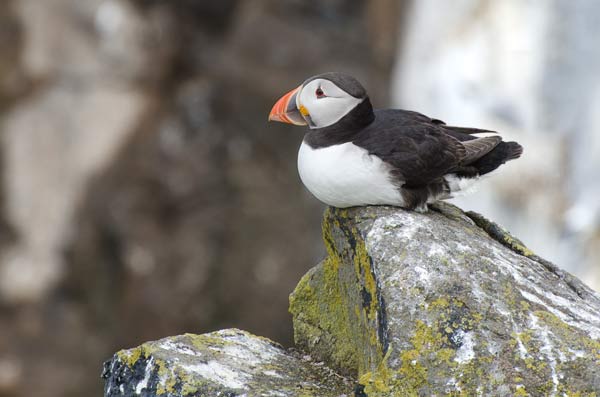 Puffins Nesting On The Scottish Coast

Along with my friend Joan from the USA who was visiting us, we saw these seabirds on the Isle of May that’s about an hour away from where we live in Edinburgh.

Puffins are very social creatures that love hanging out together and they appear to enjoy having buddies all about, it seemed to me when I saw them during our trip.

In fact, we saw long lines of them deftly clasping to tops of wooden structures on the island, and of course to rock and cliff tops: 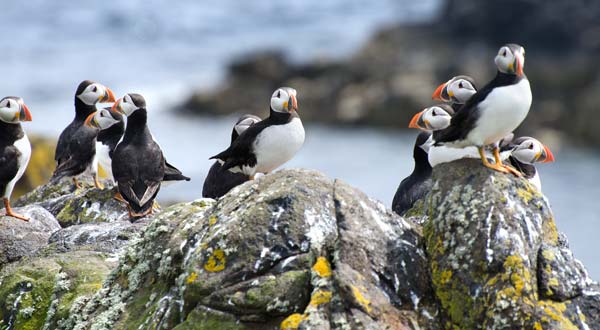 I was struck when I looked up in the air by how fast moving and almost frilly their wings appeared as they flitted quickly either back from hunting for food at sea as they flew about from one part of the island to the other: 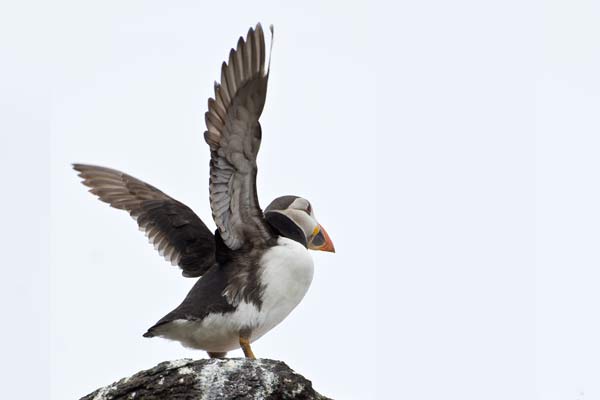 Time Out To Rest After Long Flights

What impressed me the most about so many of the puffins that we saw that day was how they stood or sat in one spot for a long time.

These are wild birds, after all.

Yet even though we humans were only about 20 feet away from them (either observing or photographing them), they stayed put. This surprised me because I figured they would be hesitant to stick around anywhere near humans.

Then I heard from several birdwatchers the logical reason why this happens, namely as follows:

The puffins rest after their long flights out to sea and back to gather sand eels to feed their young. As parents and providers for their young, their job each breeding season had always been hard.

However, their hard job is now all the harsher.

How Global Warming Is Affecting Puffins

This is due to global warming, and the chain of events that it has caused: The water is now one degree warmer, and this in turn drives algae and plankton further north because they are not comfortable with this rise in temperature.

The sand eels in turn that feed on the plankton have to follow their food further north.

And the Atlantic puffins that feed on the sand eels that feed on the plankton have to travel further and further for food for their young. In fact, their young have been suffering and their numbers have gone down substantially which of course is causing great concern to conservationists and other like-minded people.

Surprisingly, puffins rest even when they have a bunch of sand eels in their beaks that will soon be a meal for their young.

I surmise that such interludes are essential for them while they gather back their strength often from ever longer trips to find food to feed their young, and more power to them for that. 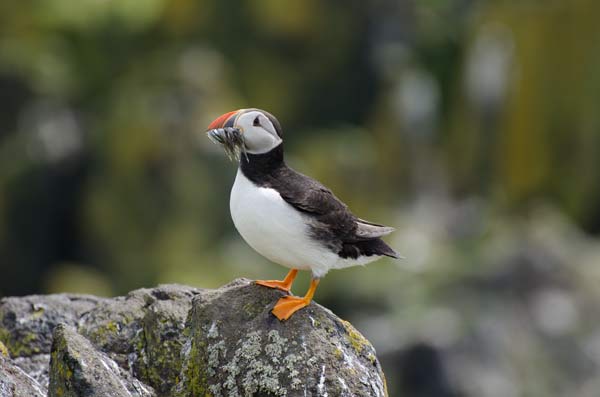 Now to some facts about these endearing birds.

Twenty-Five Facts About These Fabulous Seabirds

The size and color of puffin beaks help birds assess the relative experience and ‘quality’ of potential mates.

2.
After the breeding season, the beak bill plates are shed as nine fragments, the bright orange legs and feet fade to a dull yellow, and the white face becomes darker.

3.
The bird genus name of the three types of puffins – the Atlantic puffin, the tufted puffin, and the horned puffin – is ‘Fratercula’.

And since monks call one another ‘brother’, the name of ‘little brother’ was chosen for the diminutive bird.

4.
At a population of about 14 million birds, the Atlantic puffin has the most members of all puffin species.

5.
In the spring, the puffin becomes flightless for a short period after its flight feathers molt.

During that time, its wing and tail feathers that have become a bit ragged after a year’s use are replaced.

6.
Each year when the adult birds return to their breeding colonies, they initially spend a long time on the sea in large flocks called ‘rafts’.

7.
Puffins lay one egg per year, and the male and female share the duties of incubating the egg and rearing the chick.

8.
The young of a puffin (especially of the Atlantic puffin) is called a ‘puffling’.

The name applies both to the flightless chick that lives in its nest burrow or crevice and later on to the fledged chick that flies out to sea at about six weeks of age.

More than 200 years ago, ‘puffling’ was used to describe the young of another seabird called the Manx shearwater. 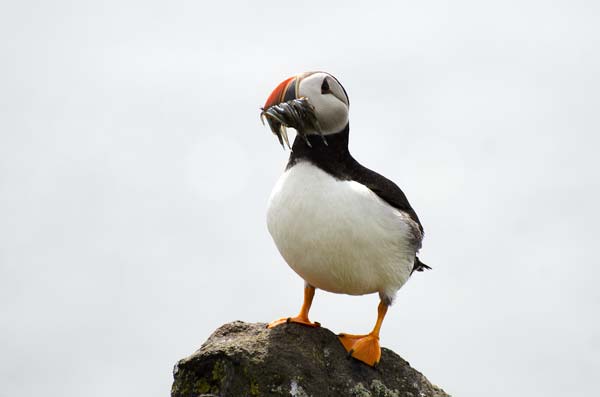 9.
The fledging period is very variable, ranging from 34 to 60 days, depending on the area and year.

Adult birds desert their young shortly before they are ready to leave the nest. The timing of the breeding in puffin colonies is highly synchronized, and so the departure of all adults takes place within a few days.

10.
Puffins are known for the iconic photos of them with sand eels stuffed in their beaks, and for the fact that they can hold many of the fish safely there at one time.

However, they collect not only sand eels but also other fish – sprats, herring and capelin – to feed their young.

It is this anatomy that enables a puffin to regularly carry 12 or more fish in its bill crosswise.

The record number of fish that any one puffin has held stands at 62 fish (61 sand eels and one rockling).

Being able to pack in so many fish at one time in its bill allows puffins to make longer trips tin find shoaling fish.

Puffins rarely or ever bring back a single large fish because such a prey would flap around as the puffin flies and in that way draw unwanted attention from gulls and skuas that would invariably dive bomb the puffin in an attempt to persuade it to drop its hefty catch. 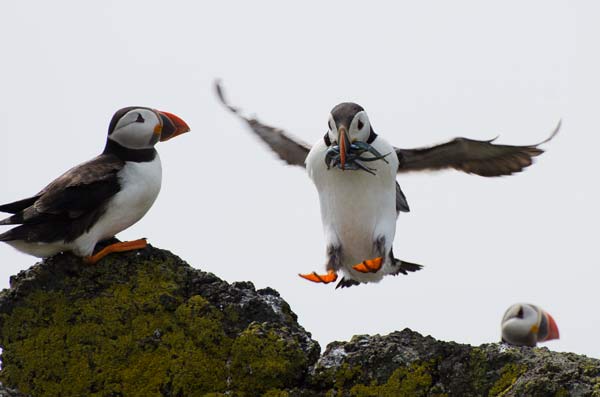 11.
Most puffins do not breed until they are five years old, and they can live for more than 20 years.

However, the estimated age of the oldest known puffin was 32 years of age.

12.
To get a rough guide to the age of a puffin, look at its bill: Two grooves indicate the bird is an adult and has reached breeding age.

However, puffins do not develop an extra groove for each successive year like the rings in trees! For this reason, it is much more difficult to precisely calculate the age of older puffins.

13.
The greatest natural predator of the puffin is the Great Black-backed Gull who can catch adult puffins in mid-air.

The gull does this after circling high above a puffin colony and picking out a lone puffin as its victim.

14.
Cleptoparasites are birds that steal a puffin’s food.

For example, herring gulls often wait for puffins returning from sea with their beaks full of fish. They then chase after them and steal the fish. They also take puffin eggs or chicks from their nest.

Delivering food safely to their young is a challenge for puffins. They often have to circle past their burrows a dozen times or more before they take their chance with their feeding.

15.
Puffins are not in any way related to penguins. 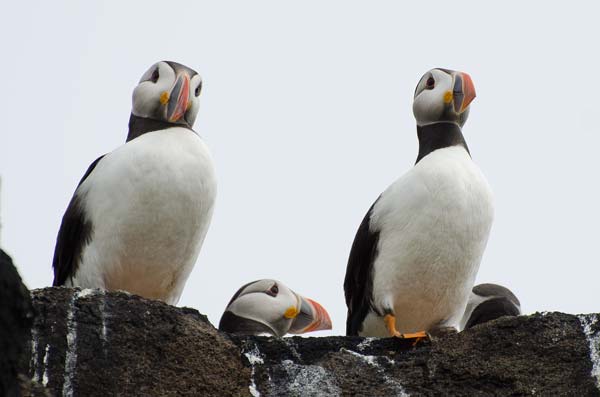 Compared with other auks which usually stay just a few feet above the sea, puffins usually maintain a cruising altitude of around 30 feet.

Once they are airborne, Atlantic puffins beat their wings up to 300 times per minute to stay aloft.

To begin with, when they bring home fewer fish – puffins also help people by acting as indicators of ocean health and the reality of what is happening with the depletion of our oceans through overfishing.

Puffins can also serve as food for people. Native peoples of the Faroe Islands, Norway and Iceland have hunted puffins for centuries. The Lofoten people of Norway use special puffin dogs to scoop out birds from burrows among narrow rocks. The Iceland and Faroe Island locals catch puffins in flight by using a fleyg, which looks like a 13-foot/4 meter-long lacrosse pole.

Hunters only try to catch puffins that are not bringing back food to their young. This type of hunting requires great skill.

Last but not least, puffins can also help tourism since tourists who come to see puffin colonies contribute to the local economy in various ways.

18.
Puffins are not an endangered species.

However, millions die due to oil spillages, global warming, and trash in the sea.

Importantly, it is the overfishing that humans engage in that has resulted in there being too little food for the adult puffin to feed its young.

19.
With reference to global warming and its effect on puffins, these seabirds can only live in cold waters that are between 32° to 68° Fahrenheit (0° to 20° Celsius).

In addition, they are adapted for preying on fish like sand eels that live in cold waters.

Global warming may increase the temperature of Earth by 5º Fahrenheit. This in turn may raise the sea level 3 to 10 ft (1 to 3 meters) by year 2100. Such rising sea levels would hurt puffins by flooding their breeding islands.

So if the Earth’s temperature increases as expected, it will affect puffins by limiting their range. It is expected that global warming will also affect the distribution of the fish the puffins eat and feed their young.

This is already being seen with the chain of events as described above with their prey the sand eels.

In Dutch, the word for ‘puffin’ is ‘Papegaaiduiker’ and in German it is ‘Papageitaucher’ – and they both mean parrot diver.

21.
In various Scandinavian languages, the names for puffin share these common derivations:

All of these probably come for the Old Norse world ‘lundi’ which refers to the lines or veins in a piece of stone or carved wood – and in the puffin’s case, to the markings on its beak.

22.
Speaking of these Scandinavian variations, the largest island in the Bristol Channel in England is called ‘Lundy’ which means ‘Puffin Island’.

This island uses several coins and stamps with puffin pictures.

23.
Puffins use their very sharp claws to dig their burrows in which they nest and raise their young.

24.
People often mistakenly think that Atlantic puffins are taller and heavier than they are.

This means that they are the same weight as a bottle of Coca-Cola!

25.
Puffins often place their beaks together to ‘kiss’ one another in what is known as ‘billing’ their partners.

And finally, puffins are faithful lovers – they stay together and mate for life.

If you like these photos we took of puffins, check out our Quillcards Puffin ecards. 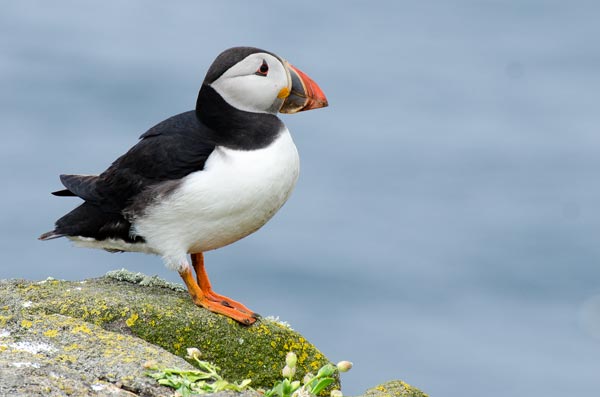