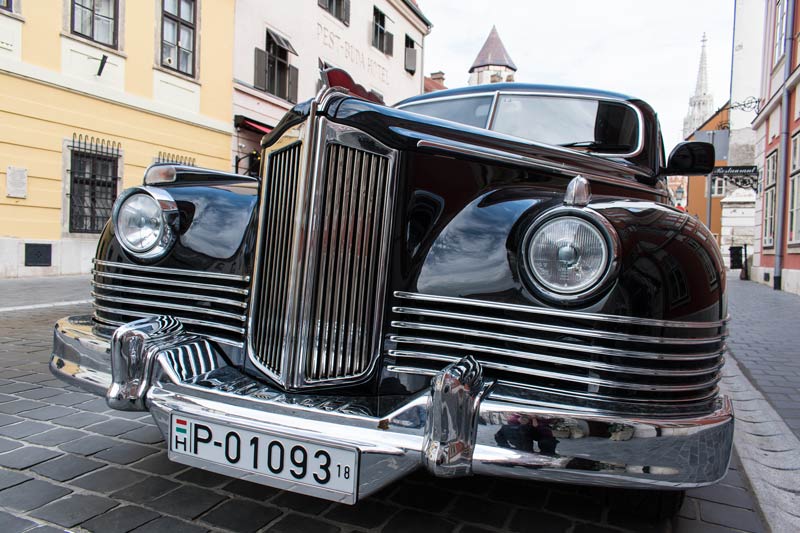 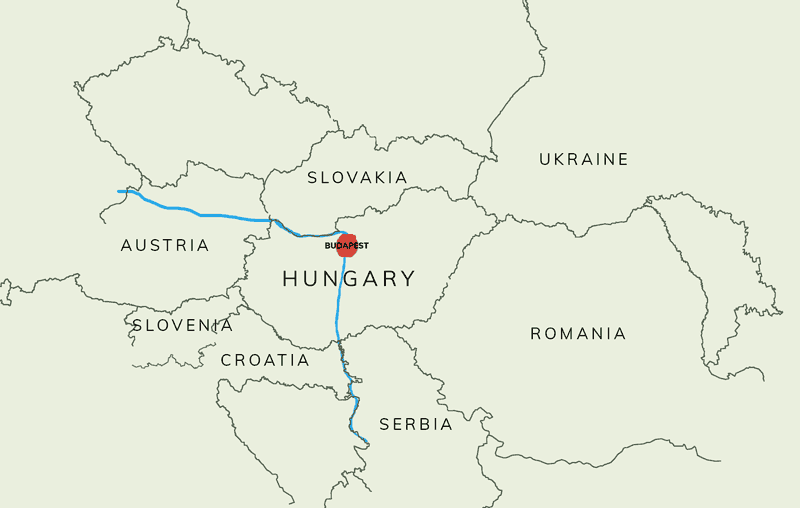 Let’s start with a quick overview of Hungary – a small, (93,000 sq km) landlocked country with a population of under 10 million.

This map shows, as you can see, that Hungary is bordered by seven countries – by Slovakia, Ukraine, Romania, Serbia, Croatia, Slovenia and Austria.

And like its neighbours Austria, Slovakia, Romania, Croatia, and Slovenia, the country is a member of the EU (it joined in 2004).

So Hungary sits as it has for centuries on the movable border between the East and the West.

The word is that compared to other former Eastern Bloc countries, it is doing well economically.

It is not yet in the Eurozone, but it wants to be.

As and when it joins the Eurozone, maybe the Western Europeans won’t take it to the cleaners as they did with Greece, for example.

That said, it has been a Schengen area member since 21 December 2007, so its borders are porous. And it has become a ‘this far and no further’ border for illegal immigrants trying to get deeper into fortress Europe.

As you can see from the map, Budapest is just south of a ninety-degree bend in the River Danube.

The city was at one time two separate towns – Buda and Pest. The bridges across the Danube joined them and the city became Budapest, with Pest to the east and Buda on the hills to the west.

And Budapest was the eastern Capital (Vienna being the western capital) of the Austro-Hungarian empire until that was broken up after the First World War.

Tamara and I spent a few days in Budapest, and our experience of the people was very positive – a gentle experience with people very warm. And the city does not feel frenetic. It feels relaxed.

Getting Into The City

The first task is getting into the city from the Ferenc Liszt International Airport.

We read up beforehand about getting into the city from the airport, so we went straight to the Minibud shared minibus counter. It turned out that the price we had read about was only if one was going back to the airport for a return journey. We were not intending to fly out of Budapest, so a Minibud trip would work out more expensive than a taxi.

So of course we took a taxi, which we booked at the ticket office outside the airport building.

We paid and collected a voucher with the licence plate of the taxi written on it. The taxi drove up, we put our bags in the boot and the driver set off, fast. Tamara and I looked everywhere around us and saw that the roads were well maintained and the buildings looked in good repair.

The lovely architecture starts right on the outskirts of the city – no miles of ugly sprawl to navigate.

Then our driver detoured in the city to drop off a small box to a man waiting for it at the entrance to a small shop. It looked like it might be an iPhone.

As a result of the detour – or maybe not – we got stuck in traffic. On arrival at our hotel, the driver said the price was greater than quoted and pointed to the small print on voucher about traffic conditions. We had a small exchange of old-fashioned looks and he accepted a lesser amount even as I was putting notes for the full amount into his hand.

Did he recognise that he was partly responsible for the extra time? Whatever the reason, he is happy and everyone is happy. Already I am beginning to see a certain characteristic facial feature – very wide, square jaws. Not long, just square – wide and square.

We checked in, and when we go up to the room we see the carpets on the landing have seen better days.

Our Hotel Room Is Huge

We have a huge suite. The bedroom and sitting room are huge with 1960s furniture. We learn later that the hotel was recently bought out in management buyout and will be refurbished. And we learn that there will be some limitations on revamping the rooms because the building was a former hospital and is listed as of historical importance.

Everything works except the tap in the bathroom which spritches everywhere. We tell reception. We also wonder why previous guests did not report it. 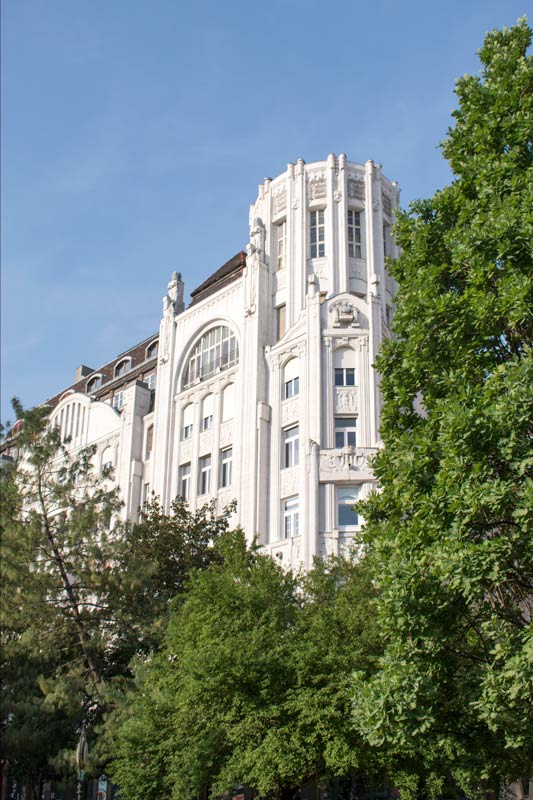 The next day we walk by the river marvelling at the architecture. Some remind me of Finnish (or Swedish) styles from the time I spent working there. Tamara jokes that she thought Finnish architecture would be a ‘snow-based’ style and that the architecture of Budapest would be more utilitarian.

We hear that trams number 2 runs by the river, so I keep an eye out for the numbers when we see trams. 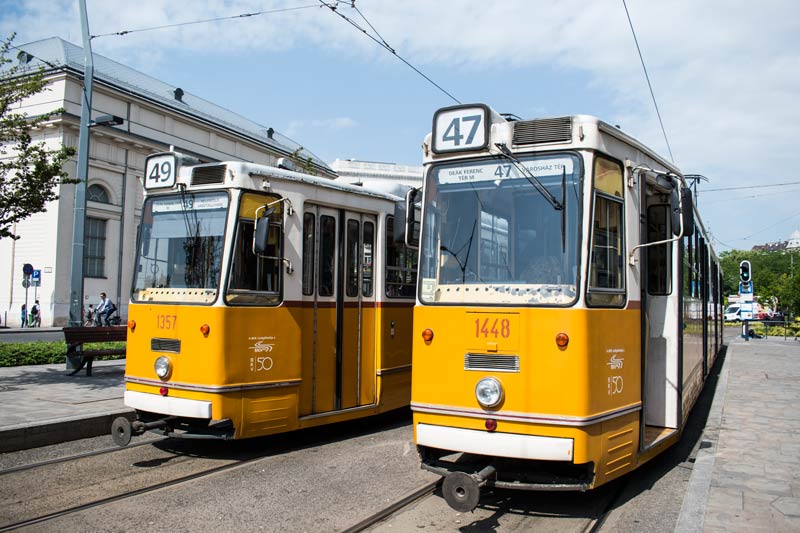 Another day I spent a couple of hours photographing and found some areas behind the frontages that were interesting. 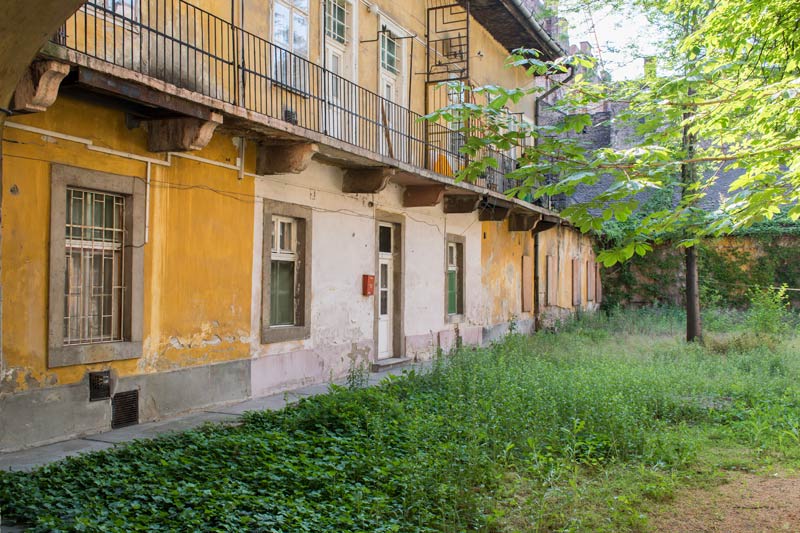 We call in at a concert hall with wonderful architecture and lovely decoration inside. We ask about programs and wonder whether we will have time to see something. 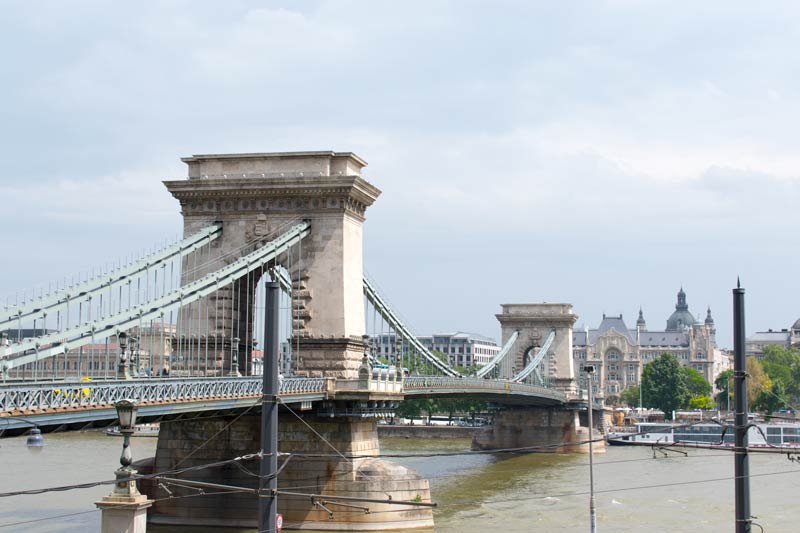 We walk to the Buda side of the Danube over the Chain Bridge. This is a view from the Buda side, looking east towards Pest.

Even from the bridge we could see that the funicular up to the castle was not working. So we catch a tiny, open-sided minibus up the hill and see the changing of the guard at the Sandor Palota – the Alexander Palace – the residence of the Hungarian president. 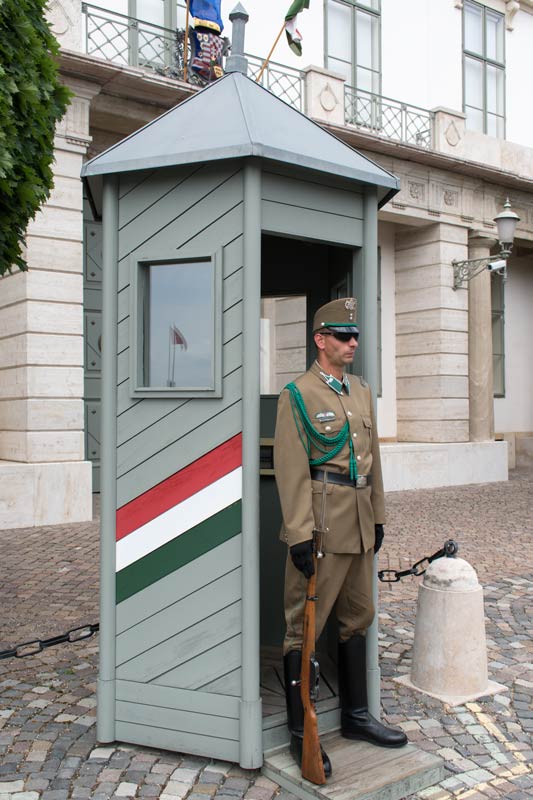 Then we walk to the Museum of Music History in the Buda castle district. On the way we see an old car that is crying out for a photograph.

Tamara is disappointed because she hoped to see some of Liszt’s original manuscripts. We learn, though, about Bela Bartok and Zoltan Kodaly going around the countryside recording folk tunes and writing down music, tracing the origins back to their Oriental roots.

We wander the streets. The architecture is lovely and the buildings are painted mustard, ochre, green. Tamara loves them. We go back down the hill with the open-sided minibus which takes a circuitous route so we see lots of lovely streets. I saw none of this when I was here 30 years ago.

Exhausted, we rest in the hotel.

The next day we go to the Jewish District and the Dohány Street Synagogue. The name ‘Dohány’ means tobacco and comes from the fact that at the time of the construction there was a cigar factory further down the street. 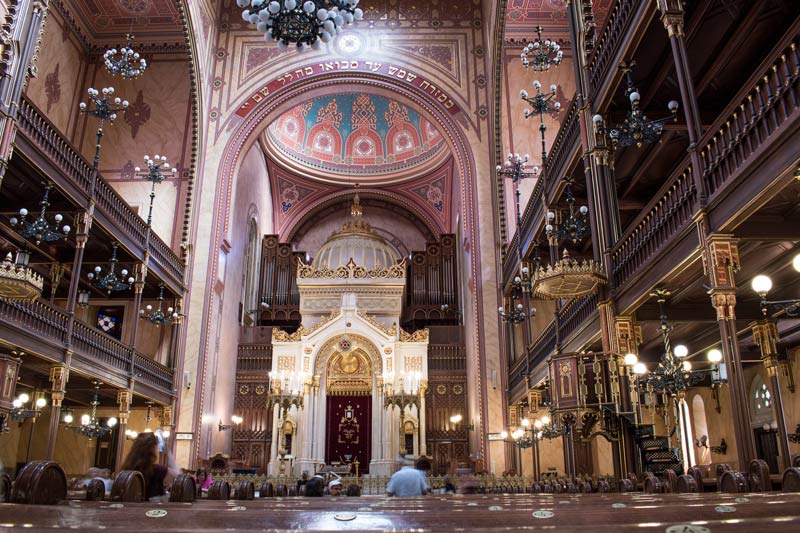 First impressions- there is a balcony and upper balcony. The structure looks very insubstantial, and well decorated. There are two pulpits. Two? Even one pulpit is very un-Jewish.

We sit down to hear the guide speak. Our guide is Yoel who at one point mentions he was young and motivated so he went to the Berlin Wall to help knock it down. That was 1989, so maybe he was 20 then. So he is 49 now.

He explains that the architect of the synagogue was not Jewish and put in some Catholic features that suited the assimilated community – the pulpits and the organ. He points out the bima, which we hadn’t noticed – which instead of being in the centre of the space is down near the front behind a low grill. And he mentions the Moslem-looking features of the two minaret-looking towers at the front of the building.

As I am listening I am thinking of Rabbi Samson Raphael Hirsch’s writings in the 1800s about the similar dangers of Jewish assimilation in Germany.

Yoel explains that the building was constructed in just three years – from 1854-59 and that the structure was built in iron, a new technique at the time, which accounts for its light and airy appearance.

The minarets are what saved the Synagogue. At the end of the Second World War, the Germans used them as communication towers to contact Berlin, so they did not blow up the building.

Meanwhile in 1944-45 the fascist Arrow Cross members were shooting Jews out of hand on the streets of Budapest.

Yoel showed us the extent of the ghetto from 1944 after the Government tried to surrender to the Allies and was overthrown by Arrow Cross and the Germans marched in. In front of us are buried 2,281 people in mass graves in what look like raised flower beds in a small area by the wall of the synagogue, marked by some plaques. We stare at the space. 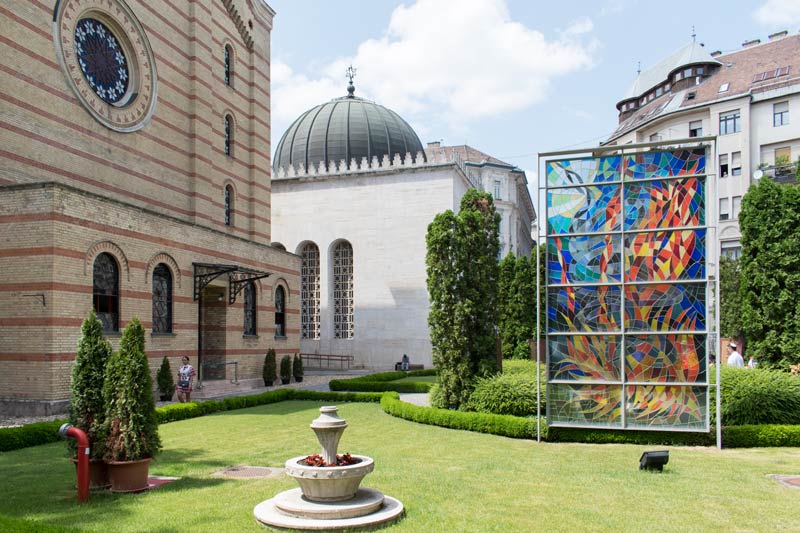 Music And Dance At The Danube Palace

In the evening we walk to the Danube Palace, to a folk dance and folk music event – great music from nine violins, a double bass, and two cymbalom.

En route we notice – cannot help but notice – how many restaurants there are and how much is on the streets in the warm days and evenings.

The next day we walked to Vaci Street that the guidebook said was the classiest shopping street. It is not. The best area is along Andrássy Street. Times have moved on.

Then on to the Liszt Museum. Tamara is in her element and enjoys it very much.

I read about Liszt’s generosity – how he helped many people and how he was besieged by budding composers sending manuscripts to him, so much so that he had to put notices in the Budapest and Vienna newspapers imploring people not to send him any more manuscripts. 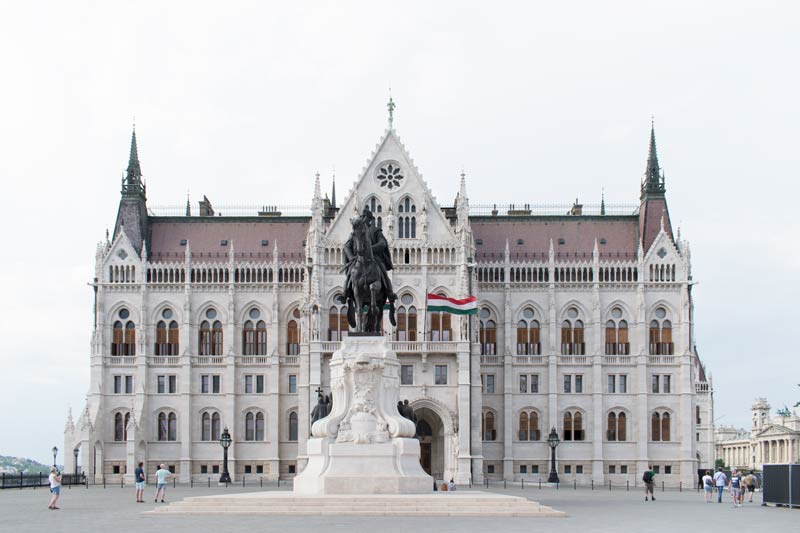 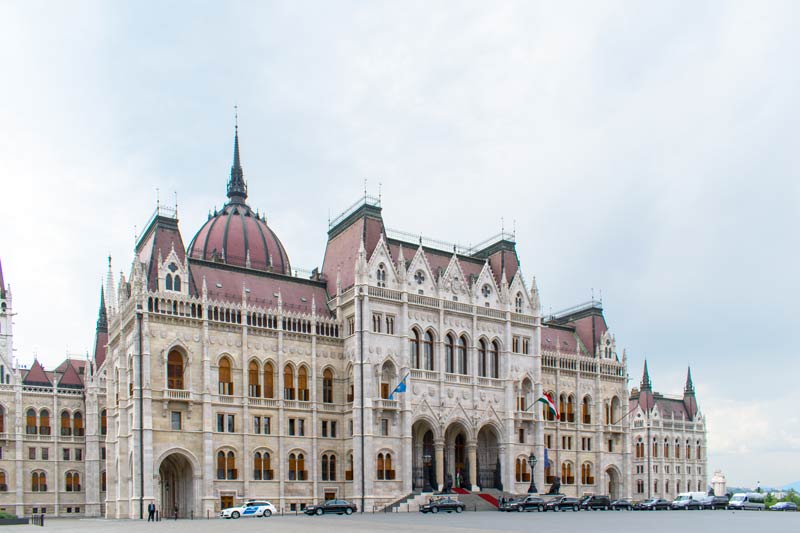 We take a metro to the Parliament building. That is interesting because the Budapest metro is the oldest in Europe. The metro cars are square like in St Petersburg. The metro escalators are steep and long. And the lighting is interesting – little panels in the ceiling – all a bit faded and past its best, but nice for all that. The metro gets used a lot and this is perhaps the busiest in terms of people moving along at a fair lick compared to what is happening above ground.

At the Parliament building we ask a policeman what is going on, because something obviously is. He tells us the Colombian President is at the Parliament. There are big black cars in a long line and no one allowed near.

And that is the point where Tamara tripped when she got he shoe caught in the groove of the tram line and broke her wrist and the holiday took a different turn, with visits to the Emergency Room of the local hospital, a cast fitted, and a decision to return to the UK.

We have a meal the next evening in the ‘M’ Restaurant – a memorable experience – warm, relaxed, intimate, nice ‘brown paper’ decor, good food, and wonderful company.

And then a flight home the next day.