The Wildfowl & Wetlands Trust (WWT) is primarily a conservation organization dedicated to saving wetlands, both for wildlife and for people.

It was founded in 1946 by Sir Peter Scott, who was both a naturalist and an artist. He bought the first wetland site for the trust he set up and dedicated his life to expanding the trust.

For many years he hosted a program on television about wildfowl and habitat preservation. The programs were a great hit with children, and an entire generation of English lovers of wildlife and the countryside owe their interest in part at least to those programs.

But as Sir Peter Scott recognized, it is not enough to see wildlife on television, and it was always part of his vision that Trust sites should not only be areas of conservation but also places where visitors could see wildlife.

The WWT now has nine visitor centers in the UK and has captive wildfowl collections from all over the world as well as benefiting from visiting flocks of wildfowl, some of which flocks number in their tens of thousands.

The Trust also does essential work internationally for the preservation of wetlands under the Ramsar Convention, which is an international treaty signed in Ramsar in Iran in 1971. Under that convention, various national agencies cooperate to preserve wetlands and the wildlife that depend on wetland ecosystems.

Martin Mere Wetland Centre is one of the nine WWT sites in the United Kingdom and is situated about five miles from the coast in Lancashire in the North of England, facing the Irish Sea.

It is formed around a series of meres or shallow lakes, which are home for the season to thousands upon thousands of wildfowl.

At the moment (December 2008) there are over 6,000 Pinkfoot Geese and over 1,000 Whooper swans overwintering at Martin Mere.

The Whooper swans will leave in March and fly to Iceland for the summer. It is well known that they fly the same route year after year, but their precise route is not known. And therein lies the story.

Wind Farms
Because there are more and more wind farms being built along their route, the swans are colliding with them. So the WWT and the wind farm development companies are working together to work out where the wind farms should be situated so as to minimize the risk of collisions.

And in order to find out what the precise route of the migrating Whooper swans is, the WWT has fitted transmitters to the backs of some swans.

For their flight at migration time, every bit of extra weight puts the swans at risk. So in order to be at their optimum weight for the flight, Whooper swans stop drinking for a period before they begin their annual migration.

The Ideal Weight
Some birds weigh 12kg (26lbs) or more, and I guess that like me, you would think that bigger birds are stronger and more likely to make a successful flight. The staff at the Wildlife Centre know, however, that a bird that weighs about 10kg (22lbs) is most likely to make the journey successfully.

The shot of this swan was taken in very poor light at dusk. And it is a nice snippet of information to know that in all probability the swan weighs about 10kg. 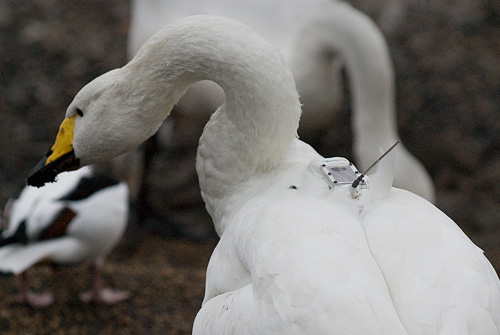 This is the link to the Wildfowl and Wetland Trust site
(note that the link opens in new browser window).