Why We Took Our Own Computer
With so many cyber-cafes in India, you may conclude that having your own computer is not necessary for general browsing and emailing.

And if you are worried about security, you can always set up a separate email account that you use just for public computers.

However, if you are planning to log in to somewhere like your online banking services then you probably want something that can offer more security. That is really only possible with your own laptop.

Having your own computer is not the end of the story though, because even with your data behind a firewall, it still makes sense to think about securing your information after it leaves your computer.

This is where a virtual private network (VPN) comes in because it protects your online identity and your data en route. It is basically an encoder and decoder that creates an encrypted tunnel through which your data is sent and received.

We chose the one we used by googling for ‘VPN providers’ and reading the reviews.

It wasn’t just security, though, that tipped us towards taking a laptop. We wanted to add posts to this blog as we traveled.

Because almost all of our blog posts feature photographs, that meant that we needed to be able to upload and work with photographs that we took – not really something you can do on a public computer!

And of course, there was the matter of security when uploading articles to our server.

Another reason for taking a computer was simply that we could take the photographs from the card in the camera and store them on the hard drive.

Because we use Macs at home we wanted to stick with something we knew and which we could work with easily. So a Mac it was going to be.

Having said that, we did see a lot of people with netbooks and they seemed happy with them. Some of those netbooks are so small and light that I found myself eyeing them enviously even though the Macbook Air only weighs 3 pounds.

Which Mac?
Why the Macbook Air and not a Macbook or a Macbook Pro? In the end it came down to weight. No additional number of USB ports or any of the other advantages could outweigh (pun intended) the advantage of low weight when travelling.

Which Version?
Well if the duffel bag in which I had all my clothes etc. was going to get thrown around, the fewer moving parts the better, so we opted for the SSD (solid state drive) option rather than the usual kind of hard drive.

One of the side benefits of an SSD is that it is quick. After turning the machine on and off a hundred times to use it, I still smile inwardly at the amazingly short time it takes to boot up and shut down. I love counting down quickly from seven and watching the screen go black before I get to zero. It just makes using the machine on the run so much more of a pleasure.

What Did I Load Onto It?
I installed Adobe Photoshop Elements so I could work on the RAW images I uploaded from my camera as we travelled. I already have Photoshop CS3 on another machine, but having left everything to the last moment I couldn’t install CS3 on the Macbook Air so I used a new copy of Elements.

I had no idea until I started using it that Elements requires that images are converted to 8-bit for image enhancements like color saturation or dodging and burning. It all worked out though and I was able to work with Elements and to grow to like it.

In fact, for use on the web, Photoshop Elements has a lot going for it. Colors are very saturated and suit the web very well.

Card Reader
I have been using the same card reader for three years or more. It can read SD cards and Compact Flash Cards. The camera I took uses SD cards so I figured I would get a smaller card reader that just accepted SD cards.

The unexpected bonus was that it reads much quicker than the old card reader. I tried the new reader on my other Mac that is running Leopard 10.5.8 and it is equally quick on that. If you haven’t changed your card reader in a while, you might want to try a new one.

As a side note, the camera I took was a Nikon D60 with a 35mm f1.8 AF-S lens. It makes a small package and I made up for the lack of a zoom by simply moving nearer the subject when I needed to.

Packing it
To protect the Macbook Air I used a neoprene Contour case from InCase and slipped a pad of writing paper inside the case either side of the Mac. As the trip progressed and we used the writing paper, the pads got thinner but the Mac stayed free of dents and dings.

Getting On Line
This was the fun part. We didn’t want to have to rely on finding cyber-cafes that would allow us to connect our Mac either wirelessly or via an ethernet cable. Also, many cyber-cafes only allow customers to use the cafe’s own machines.

On the other hand, finding cafes that would allow us to hook up might be our only choice. So I took an ethernet cable and a USB to ethernet adaptor, just in case. 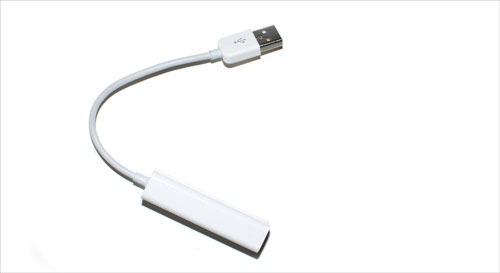 USB Modem
What we really needed was a USB modem. It took a bit of research before we left before we found one that would work on a Mac running OS 10.6 Snow Leopard, and in the end it came down to the Tata Indicom Photon + with their Prepaid option.

I tried researching USB modems by looking on the websites of the providers, but I found them a bit impenetrable. In the end I found the information I needed from my Facebook friends.

We landed in Delhi and after a preliminary visit to the shop to ascertain they had the modem and could hook us up, we returned the next day to find that the scaffolding for the revamping of Connaught Place had extended to the front of the Tata shop, which was therefore closed.

Ah well, “The best laid schemes of mice and men…”

We already had train tickets to Agra for the following day, so when we arrived in Agra we tried the Tata shop there. That is when we found out that the Photon + had not reached every state in India.

Agra is in a different state from Delhi and the Photon + had not yet been introduced there.

Rajasthan
We found a Tata outlet at our next stop, which was in Udaipur in Rajasthan. The Tata shop is in Skakti Nagar in the new city, somewhere we would not have visited but for our search for a modem.

It is always nice to have a reason to visit somewhere one might not usually visit and this was certainly true in Shakti Nagar. It is a quite different experience away from the narrow, winding lanes and bathing ghats of the old city.

Having found the shop we were told we could not buy the modem without having a permanent address. I asked to speak to the manager and after explaining we would only be in India for two months he agreed that a hotel address would be OK.

We returned to the hotel at which we were staying and got them to photocopy a page of their signing-in ledger and I went back to the Tata shop.

The Manner Of Things
In the manner of things in India, the address I gave was still not OK. The person I spoke to said it was deeply regretted but it had to be a permanent address. I mentioned I had spoken to the manager earlier. I waited and smiled while they discussed matters.

Patience and a willingness to enter into the spirit of things mean a lot in India, and personally I like it.

How To Install The Modem Program
I plugged in the modem and the IT guy at the Tata shop opened up the software package in the modem icon and set everything up with the exception of actually activating the modem. For that he had to plug the modem into a PC. Once that was done we were on line and in business.

We now had internet access anywhere we happened to be in India.

The Second Month
Paying for the second month of internet access was easy. When our first month was almost up, we went into a Tata shop in Darjeeling. The identifying number of the ‘address’ for the modem is printed on the box in which the modem came (so don’t throw away the box).

Five minutes later the confirmation email came through to the shop and we were all paid up for our second month. As I said, this was easy.

Did It Work Everywhere?
Our trip took us more or less all the way across northern India and the modem performed everywhere. The connection was a bit draggy in Darjeeling, where it also sometimes took three or four attempts to connect. Darjeeling is in the far north east of India, tucked into the eastern end of the Himalayas, so perhaps it is not surprising that there was a drop in performance.

So with a slightly qualified yes, the modem worked everywhere. It was at its fastest in Delhi when we returned there, but overall it worked very well indeed and I recommend it to anyone taking a Mac to India.

Conclusion
As for the Macbook Air itself, it worked flawlessly. It is a delight.