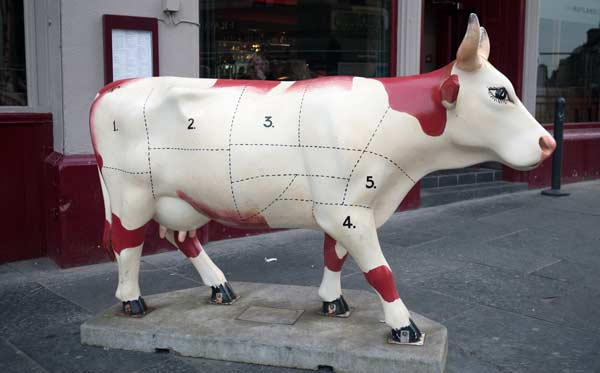 A couple of days ago, Tamara and I passed this life-size model of a cow outside a restaurant. We just didn’t like the way the cow was shown jointed.

What you can’t see is that around the other side of the model, the cow is shown in its ‘natural’ state with its hide intact.

Obviously it was an advertisement designed to attract diners, and not a guide for trainee butchers showing them how to joint meat.

Tamara and I knew exactly why we didn’t like the advertisement. It was because it denied dignity to the cow, even though it was a plastic cow and there were no real cows around to see it and be dismayed at the thought of their future.

We walked on a little way and then turned back so we could photograph the model. As we were photographing it, it struck me that the problem wasn’t with the diagram of how the cow was going to be cut up. 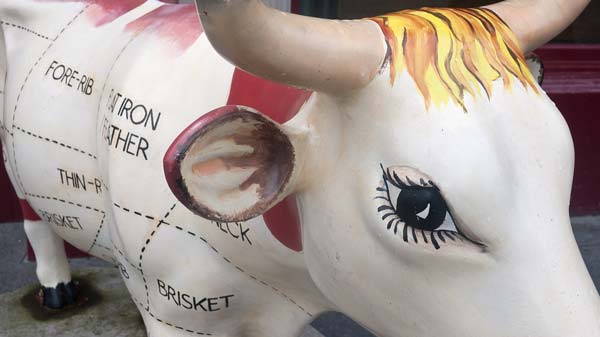 The problem was that I had registered that I didn’t like it and then I had just walked on – at least for a little while.

I’m not a vegetarian, so I can hardly say that I’m opposed to the idea of killing animals for food per se. But equally I am aware of the indignities we suffer on animals while they are alive.

And the root of my objection to this advertisement is that it is yet one more way that our feelings are encouraged to be deadened so that we objectify living animals and see them as a kind of ‘pre-dead’ meat.

And that can translate into a lack of care when we see farm animals being treated inhumanely.

The Continuum Of Care

At one end are people who will not wear leather belts or leather shoes because they do not want to be part of the chain of demand for leather that means that somewhere a cow will be treated badly while it is alive, or indeed that it will be killed at all.

Further along the continuum are people who will feel there is something inhumane and degrading about stapling plastic tags through a cow’s ears, no matter what arguments of animal health and farming husbandry are raised. 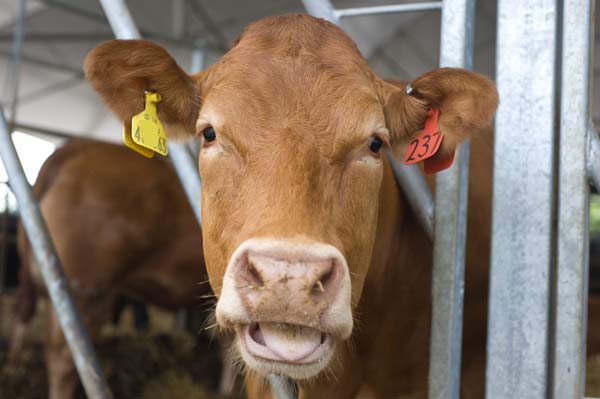 Then there are those who would simply want farm animals to treated humanely while they are alive.

And at the other end of the continuum there are those who, without a thought, will shove cows into stalls just big enough to contain them and hens into tiny battery cages and leave them there to rot during their entire lives.

While Looking At Some Of Our Photographs

I was originally prompted to write this article when Tamara and I were looking back through some of our photographs, choosing images for our upcoming range of greeting cards.

One photograph we came across was of the cow with the tags through its ears. I took the photo at a farm where animals are treated very well. The cows were in a circular feeding station at the time, but they spent most of their days grazing in the nearby fields.

The other photograph we came across that contrasted with the first, was this one of sheep and ponies on Dartmoor taken during our visit there in the summer of 2010. 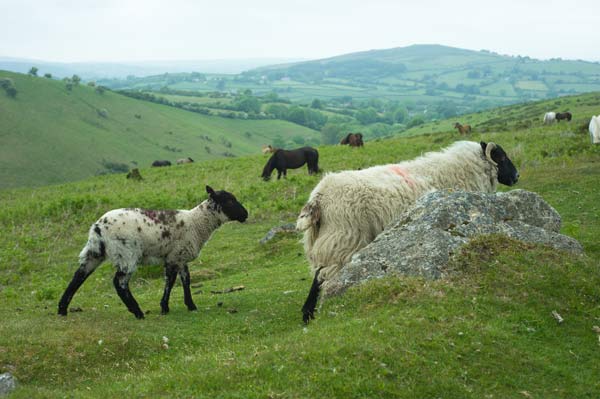 It got me thinking about how I had been affected by what I had learned through our involvement with Compassion In World Farming (CIWF) – a charity whose work Tamara has been following for five or six years.

CIWF is a pragmatic organisation that campaigns peacefully to end all cruel factory farming practices worldwide.

Recently, a new CIWF group started in Edinburgh, so we went to the first meeting held at the house of the local organiser, Gary Waterall.

We discussed the plan to have a booth at one of the shopping centres on the outskirts of Edinburgh. The idea was that we would hand out leaflets and other information and be ready to answer questions from passers by.

Except that I felt spectacularly unready to answer any questions about the treatment of farm animals.

Tamara knew much more than I did about the plight of some factory farmed animals and about the work of CIWF. However, she was also conscious of the responsibility of being able to adequately answer questions from interested people.

So she requested some fact sheets and videos from CIWF headquarters and when they arrived we divided them up and started working our way through them.

Here I just want to talk about dairy cows and laying hens.

I learned that dairy cows are selectively bred so that they weigh about three times what a typical cow would have weighed in Elizabethan times.

As I alluded to in the title to this article, they are basically giant udders with a cow on the end.

A ‘normal’ cow gives about 4 litres (1 U.S. gallon) of milk per day. Selectively bred Holstein-Friesians give more than 22 litres (6 U.S. gallons) of milk per day over three forced lactations, and then they are sent off for slaughter.

While they are producing milk, factory farmed dairy cows are kept in a low movement environment with little or zero grazing and fed a low fibre, high-energy diet that is unsuited to their stomach and intestinal systems but gives a high milk yield.

And this is in a good environment; Their lives are much worse in some industrialised systems.

Caged laying hens get no natural daylight. They sit under a dim artificial light to discourage activity and aggression and they are exposed to as long a period of light in each 24 hours as possible to encourage them to believe it is summer when they naturally lay more eggs.

In the European Union, hens must get a minimum of 8 hours of darkness in every 24 hours.

Before the introduction of enriched cages in the European Union in January 2012, many hens lived in barren cages which are just hard floors with no perches and no nest box.

Birds caged in barren cages cannot peck, scratch for food, nest, flap their wings, or have a dust bath.

As of January 1, 2012, barren cages are banned in the European Union. Enriched cages have a straw floor and give a minimum of 750 cm² hen with 600 cm² of usable space. That is less than the size of a sheet of A4 paper or about nine inches by ten inches.

Enriched cages have perches – but they are still just a few inches off the ground.

Enriched cages are better than barren cages. However, both put the bird in the box where it does nothing but sit and eat and pump out eggs at an unnatural rate until it is past its best, when it is killed.

The former Farm Animal Welfare Council (an advisory body to DEFRA – the Department for Environment, Food, and Rural Affairs in the UK) concluded in its 2007 report on enriched cages:

FAWC considers that all commercial systems of production for laying hens offer some compromise in terms of the hen’s welfare. However, well managed enriched cage systems are able to offer the potential for an acceptable balance between the requirements for the hen’s health and welfare, and public health, in combination with economic and environmental considerations.

Make of that what you will. To me the report says that hens are better off when they are not in cages, but what the heck – it’s not the worst choice…

We spent a few hours in rotation with other volunteers at the shopping centre and spoke with people who were interested to learn about the work that Compassion In World Farming does.

It turned out that we were adequately prepared and able to talk to people and that we really needn’t have worried. The people we spoke to were sympathetic, concerned, and treated the matter seriously.

So the question we kept asking ourselves was how people who worked day after day with chickens shoved in battery cages could do so and not be affected by what they were doing.

We are not starry eyed and we do not have rose tinted spectacles, but we still wondered how people could look at animals and effectively treat them as ‘pre-dead’ produce.

The Movement For The Better Treatment Of…

Whether the subject is recycling, healthy eating, a fairer economic system, social justice, or the question of where the produce on the supermarkets comes from – it’s clear that there is a groundswell of public opinion that wants to push things towards a more humane system in whatever arena.

Some supermarkets in Britain have recognised this and have changed the source of the food they offer. They have made sure that they buy from sources that do not encourage the worst practises in factory farming.

So for me that take-away lesson on seeing the life-size, jointed plastic cow or browsing the supermarket shelves is not to gloss over the things that should halt me in my tracks.

I know that I should and must look at food packaging and make sure that I do my part to buy from sustainable sources that treat animals fairly. And I should continue campaigning for better farm practises.

If you want more information, contact Compassion In World Farming.

This is from The CIWF Food Business Awards – I have put the winners in bold for easy reading. If you are interested, you know where to shop and which supermarkets to avoid.

The Most Compassionate Supermarket Award is our most prestigious and goes to the retailer with the highest overall score in our Survey. Previous winners have included Marks and Spencer and the current winner, Waitrose.

The Best Volume Supermarket Award is given to the highest scoring retailer of the ‘Big 4’ supermarkets. The biggest UK retailers account for more than three quarters of the grocery market share making them hugely influential. Sainsbury’s have shown consistent commitment to farm animal welfare and are current holders of the title

The Most Improved Supermarket Award goes to the retailer making the largest gains in animal welfare since the previous survey. Previous winners have included Sainsbury’s, Morrisons and the current winners The Co-operative.

Finally, you may want to use the CIWF Know Your Labels guide next time you go shopping.