Bleating Out The Competition

Yessiree, things are surely revving up for sheep right now!

To begin with, a 2015 animated comedy film produced by Aardman Animations called ‘Shaun the Sheep’ has just hit the movie theatres here in the United Kingdom.

Ah, yes, and it’s featuring the wooly wonder Shaun from the fabulous creators of Wallace and Gromit, of course. It’s also getting rave reviews.

You need to know just how beloved its star Shaun is: This past summer, he was voted the United Kingdom’s best-loved BBC children’s TV character in a competition held by Radio Times. (Radio Times is a popular weekly TV and radio program listings magazine that has been in publication in the UK since 1923.)

As Paul Jones reported on the Radio Times website, Shaun “[beat] off competition from Postman Pat and Sooty and Sweep” to be named the most popular BBC children’s character of the last seven decades.

No mean feat, quite impressive, Shaun: I say hats off and thank you very much, Nick Park, for creating this adorable critter!

Now To The Lunar Connection

Sheep come into the spotlight all the more on February 19th this year when the 2015 Chinese New Year will be officially celebrated as the year of the “horned animal” – cited by some as a sheep and by others as a goat.

The Chinese New Year traditionally celebrates the lunar calendar, and every year a different animal gets to take center stage.

According to a BBC World Service report that I heard on the radio this morning, hundreds of millions of Chinese people were pouring into the train stations today heading for their family celebrations around China. The Chinese New Year is an extremely important holiday that everyone strives to celebrate.

Red will be seen in spades since it symbolizes prosperity in China: Processions, dragon dances, street performances and more festivities with red decorations will last for 15 days until the day of the Lantern Festival which falls on March 5th this year.

Equally impressive, sheep rule again (and much as I think goats are wonderful, I’m going to focus here on sheep)!

I’m sticking with sheep because hearing about the Chinese New Year recently reminded me of the huge Cydectin Kelso Ram Sales show that my husband David and I went to back in September.

We’re estimating that there were several thousand people who attended the ram show last September 12th.

Not to be outdone, mind you, there were a staggering 4,964 rams from all over the UK and Ireland who were up for sale then.

So it was a day when those rams’ fates could change. For if they were sold in auction, they would be moving on to pastures new.

However, we saw it as a day with tons of potential ram buddies about to meet — and with nary a female in sight.

Hey, you never know: Maybe some of those rams back in September were telling one another about the great lunar New Year coming up now this week — evidenced here by these Hampshire rams who are, for all we know, whispering excitedly in one another’s ears about their Asian cousins’ place in this year’s calendar: 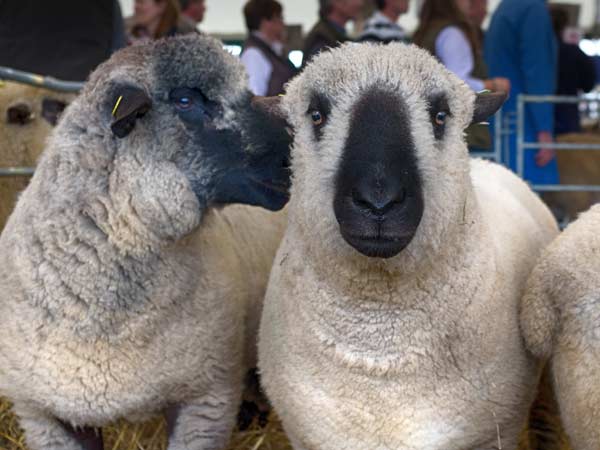 For the farmers who were there, it was all about mating: Which of the rams would be best to breed with their ewes back at home?

They had first come the day before the official sales to see what the rams on offer were made of: This meant going from one hay-lined stall to another to check out the rams in which they were most interested.

Then the day of the sale, they were prepared to place their bids on which of the rams would hopefully be the right stuff for their females back home.

So it was a time for work, looking again all the more intently at what was on offer under the 18 big rings that spread over the large site.

Here’s what was happening under one of those rings, as the auctioneer on the raised platform in the middle conducted bidding by the farmers for the rams: 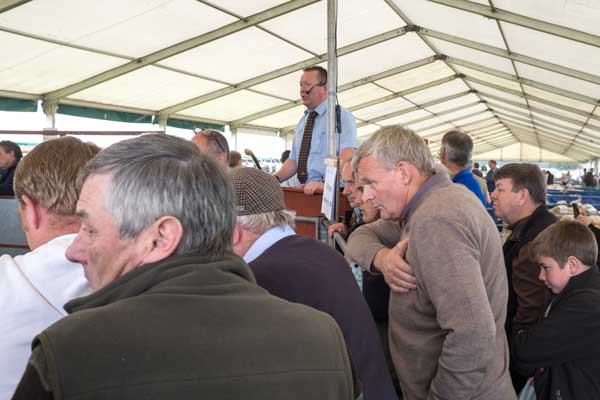 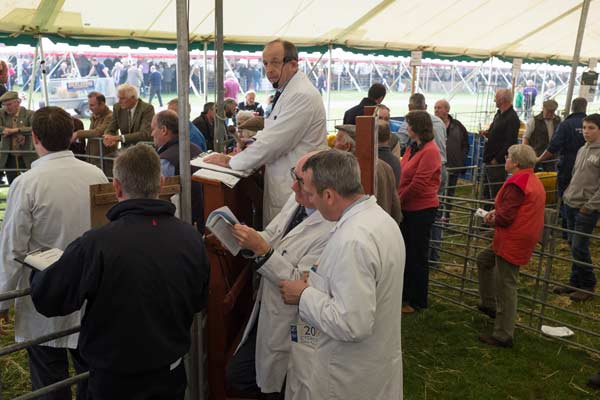 To purchase the rams they wanted, farmers had to use their bidding skills since all of the animals were sold through auctions like that one shown above.

There were eight auctioneers participating that day. To successfully whip up business, they had to keep up the stream of information that they yelled out under the big rings to all who might be up for buying one of their rams.

I marveled at how they kept up the patter. When I questioned a farmer near me about this, he said auctioneers start young and they are able to keep up their auctioneering babble for hours.

The biggest and most famous one-day sale of rams in the world, this annual ram sales event has been going on for 176 years.

Held in the small town of Kelso on the Scottish Borders, the show runs under the auspices of the Border Union Agricultural Society (BUAS) and various committees and sponsored by the company Cydectin.

Cydectin makes products first launched in New Zealand. Its website explains that “production animals on NZ farms are constantly under pressure from parasitism, resulting in production losses.” It claims that its products have been created to combat parasitism in sheep, cattle, and deer.

I don’t know anything about these products, but my hope is that they make life much better for animals and farmers alike. 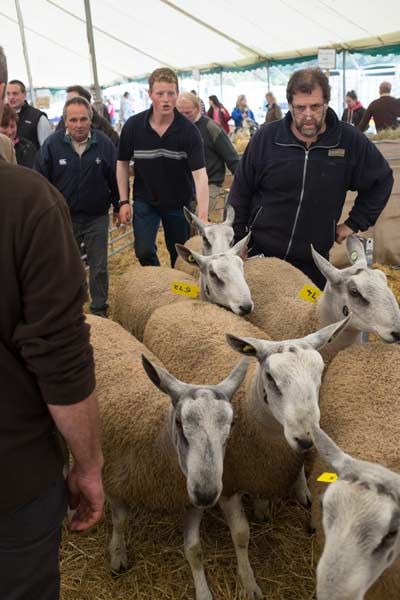 As outsiders of this agricultural world, my husband David and I attended the ram sales event for one reason only: We adore animals, and what a grand sight it was to see so many beautiful rams under one big sky!

We are also eager to learn new things, including about the business of livestock.

For example, I learned that the rams are called “tups” in the farming community.

Here’s a crew of Suffolk ‘tups’ leaving the auction ring in orderly fashion: 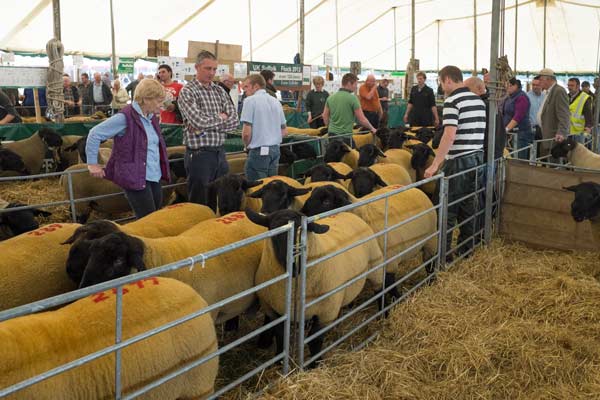 Getting Down To Business

What are these guys talking about in this powwow here?

That’s for us to wonder and them to know – which makes our entrance this week into the Year of the Sheep all the more exciting, I reckon. 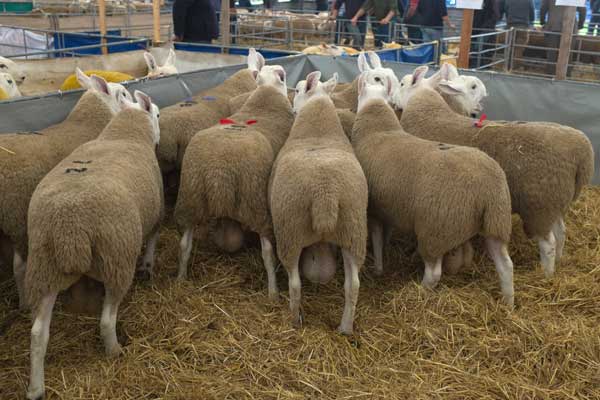 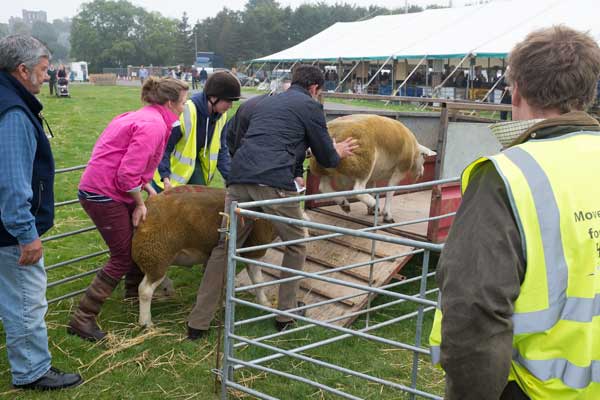