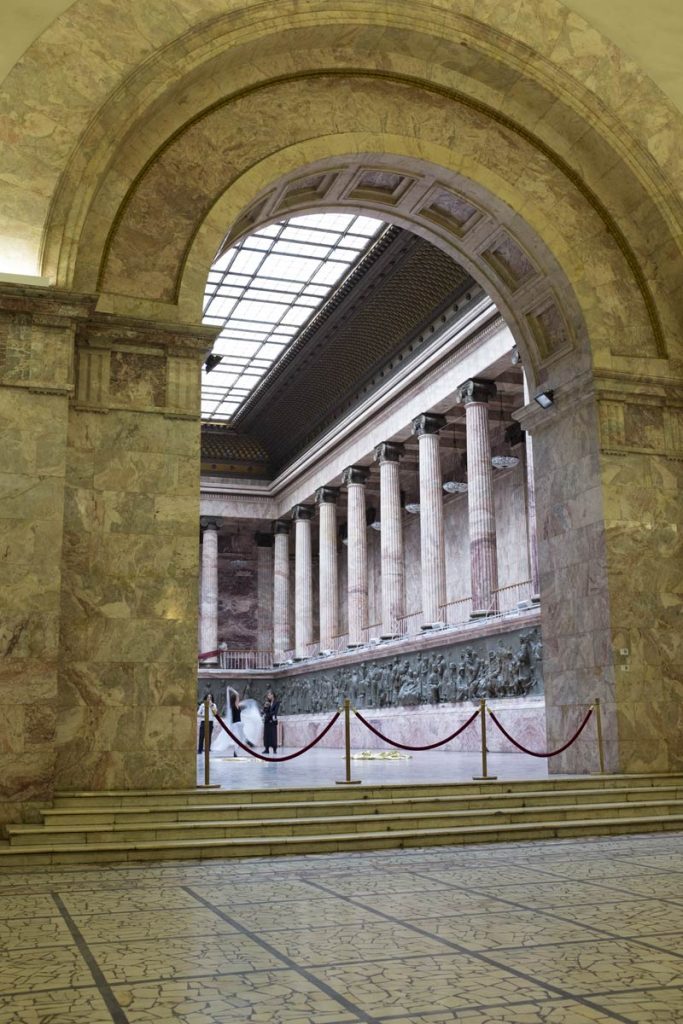 Continuing from Part One of our Saint Petersburg Diary…

We go to the Ethnographic Museum where the first thing is to get through the door. It is massive and heavy and gives way onto this main corridor – lovely, as you can see.

We spend hours there looking at rare photos, costumes, and things from cultures from one end to the other of mother Russia.

We wonder whether all these peoples have moved towards a culture of modern mediocrity in the 21st century. Perhaps we should journey all the way across Russia to find out.

It becomes a running joke between us. Will the shop ever be open? On the third or fourth try the shop is open and Tamara buys the books.

The next day we go to the Hermitage in what was the Czar’s Winter Palace. We climb the Jordan steps. I stand back on a corner of the staircase and find myself in a family group having my photograph taken along with the rest of the family. Tamara laughs to see me trapped in among this family, a foot taller than everyone.

I imagine the family back home after its holiday, showing the photos and someone asking who the tall man at the back is. 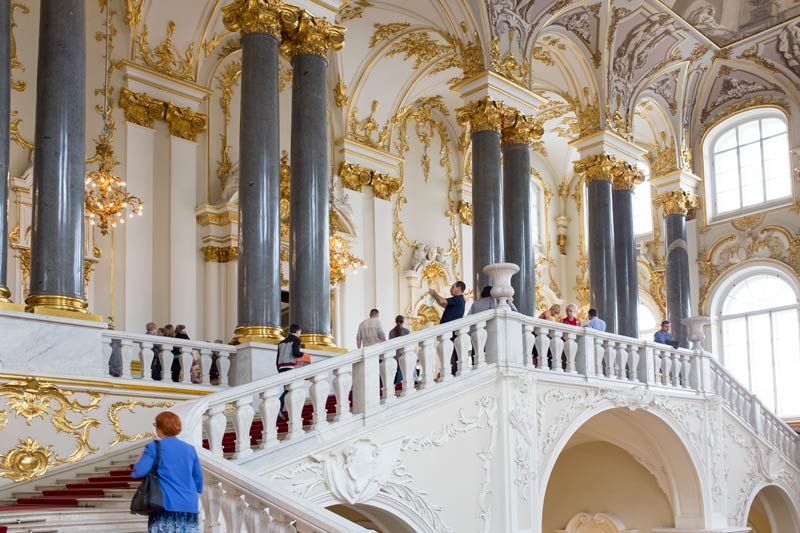 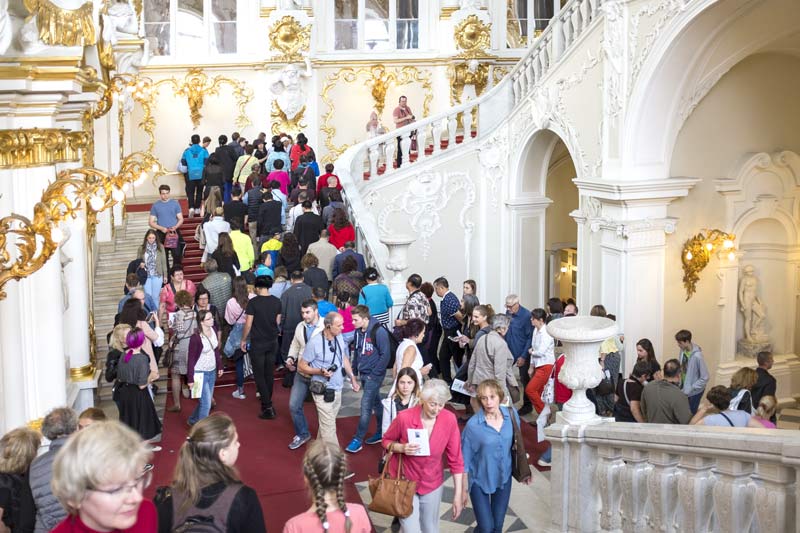 Once up the steps there are endless grand, opulent rooms packed to bursting with snaking lines of tour groups but empty of things. At every doorway there is a crush of groups going this way and that trying to pass each other.

At one end of a palatial room there is Alexander Nevsky’s tomb in dark stone and black metal – the sole exhibit in the room.

This is not a museum with exhibits, it is a former palace. We really should have read the guide book more carefully, because the Winter Palace is just that – a palace. It is rich and sumptuous, but more or less empty.

What do the tour groups see as they rush with their eyes fixedly on their tour leaders as they snake through the palace and then back to the cruise ships in the harbour? They have the photos to prove it.

It is a crazy scene, filled to bursting with people.

Standing Where History Was Made

We go into a small dining room off one of the grand rooms. There is no one else in it but there are signs saying not to touch anything. In 1917 it was occupied by the Provisional Government that formed immediately following the abdication of Tsar Nicholas II.

It is into this room that the Bolsheviks came and simply arrested the Provisional Government. It is eerie to stand in a room where world history was made.

Later we learn that the Bolsheviks had captured the Peter and Paul fortress across the river Neva and turned the guns of the fortress on the Winter Palace and shelled it. That must have added authority to their claim when they burst into the dining room to carry out the arrest.

Art, Give Me Art

We go to the cafe in the palace. It is set off from a corridor on the ground floor amid swirling tour groups. It seems that the whole world must have passed here.

We ask directions to paintings by Flemish artists. They are in a wing of the palace far from where we are. On the way we make our way through a crowd waiting for a clock to strike. 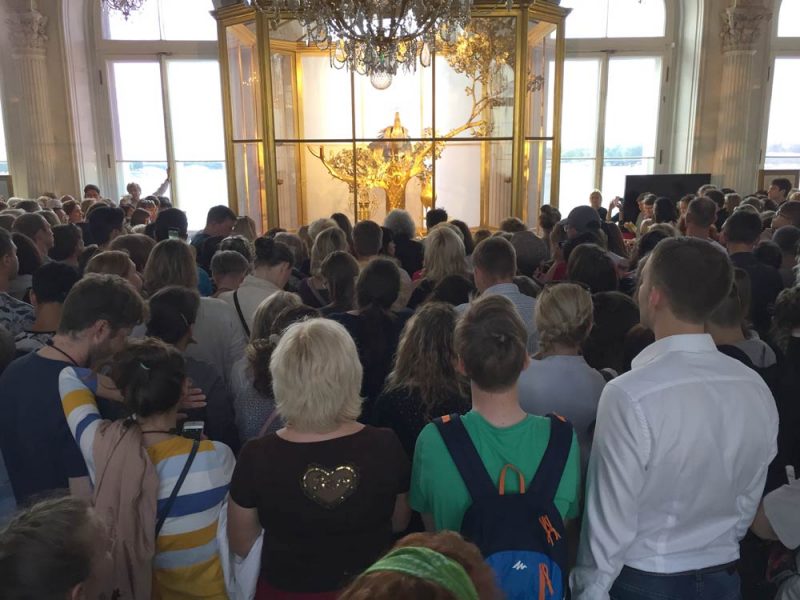 We reach the Flemish paintings. Bruegel and others are badly hung with poor lighting, high up and impossible to view properly. What a mess.

We find a better room with wonderful Rembrandt paintings. 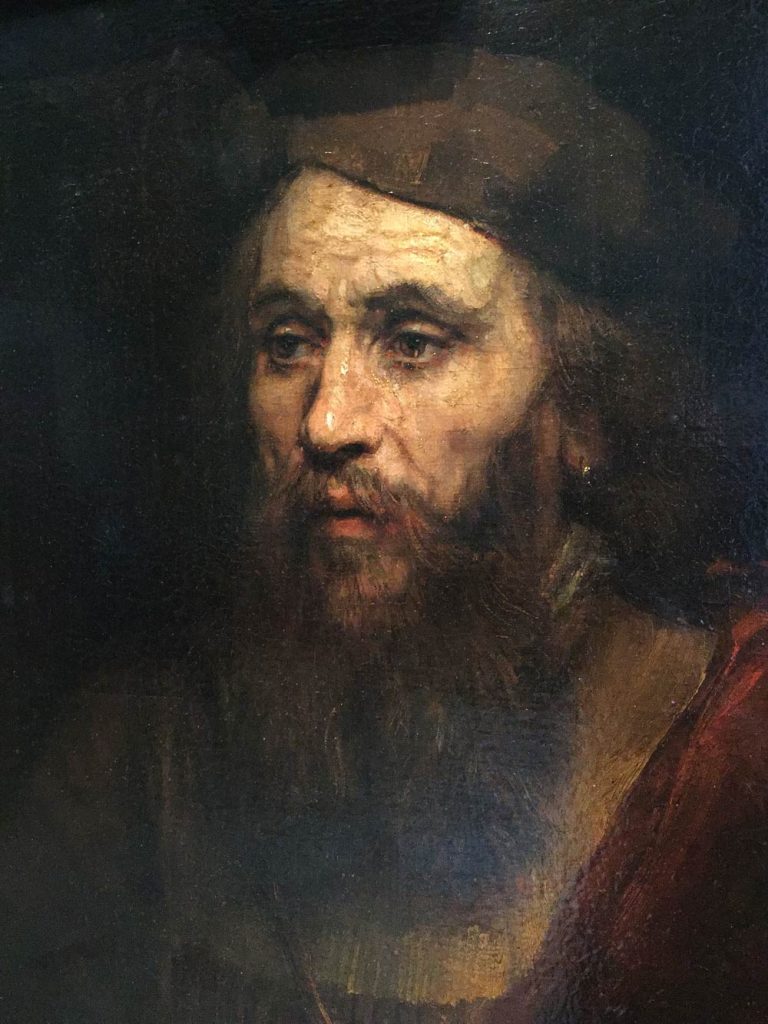 We wait for a group to pass so we can see Rembrandt’s The Prodigal Son. It’s a favourite of the tour group leaders and as one group moves on another speeds in. We get near the painting by gatecrashing a tour group. 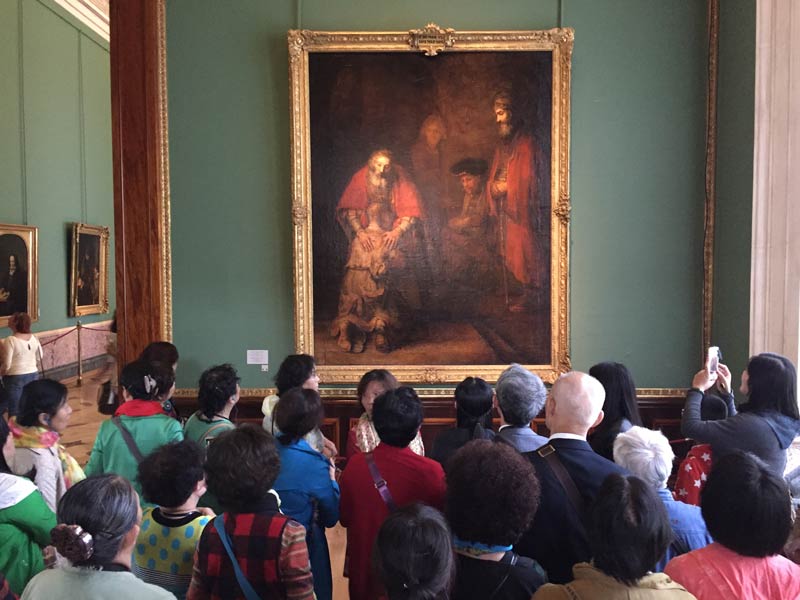 We go to the Great Choral Synagogue. This is ‘our’ section of town, not a foreign cultural experience.

Prince Igor at the Mariinsky

That night we go to see the opera Prince Igor at the Mariinsky Theatre. Quite a lot of people are dressed stylishly. We have good seats (bought beforehand in England) with a good view of the stage.

We are in the dress circle and I imagined that would be raised higher up above the stalls. In fact, we can almost lean over and touch those seats. It is an unusual experience that feels like we are back in time when things were more intimate.

We talk to the man in the seat next to us. He is from Ulyanovsk and has seen the opera five times but never live. He tells us that Prince Igor had its premiere here in the Mariinsky. It is a two-hour flight from Ilyanovosk to Saint Petersburg but a day and a half by train because there is no fast train from Ulyanovsk to Moscow.

The opera is strangely different, with lots of people on stage and a weighty performance that is both strange and moving.

Not everyone is so taken with the opera, judging by people in the stalls who are looking at their cellphones during the performance. The lights of their phones show up with little rectangular lights in the darkness.

We queue up for tickets outside the cathedral. I direct queue-jumpers to the line behind us. Russians in front of us are somewhat bemused at me directing people. When I smile, they come to life as though they previously thought we were in another dimension. 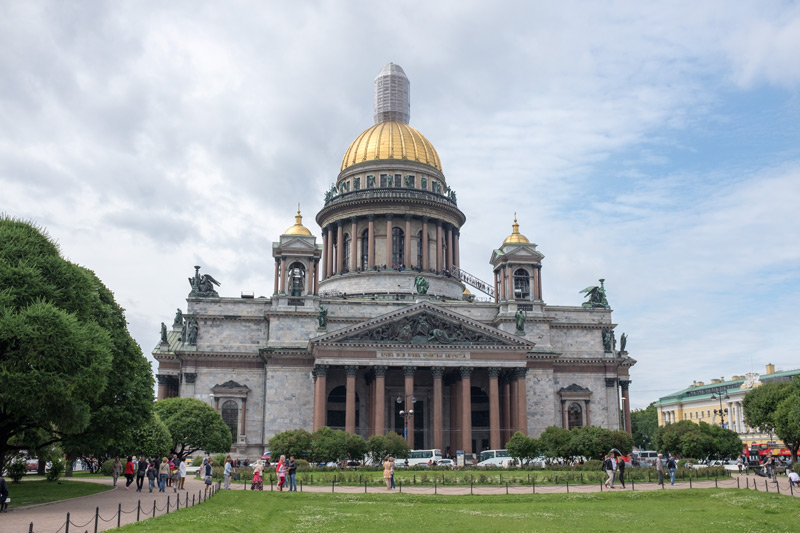 We visit Nabakov’s house which near Saint Isaac’s Cathedral. Nabakov came from a wealthy family. The family owned and occupied the whole house and the house is in a good area and the rooms are wood-panelled. We learn that Nabakov discovered a blue butterfly in Albany when he was in the USA. It is named after him.

The young woman at the desk, Alina, shows us one of the rooms that have not yet been restored. The panels are stained and the ceiling is missing in parts. Alina tells us the house was in disrepair for years and it is a long job to renovate it. We ask her how Nabakov is regarded in Russia today. She said he is highly regarded now that censorship is less than it was – they have Fifty Shades Of Grey, for example.

She explains how when Nabakov was teaching in the USA, he translated Eugene Onegin into English and scoured advertisements in magazines to get idiomatic expressions that his students could relate to. She uses this example to explain how proficient Nabakov was, to be able to use idioms in a foreign language with precision. 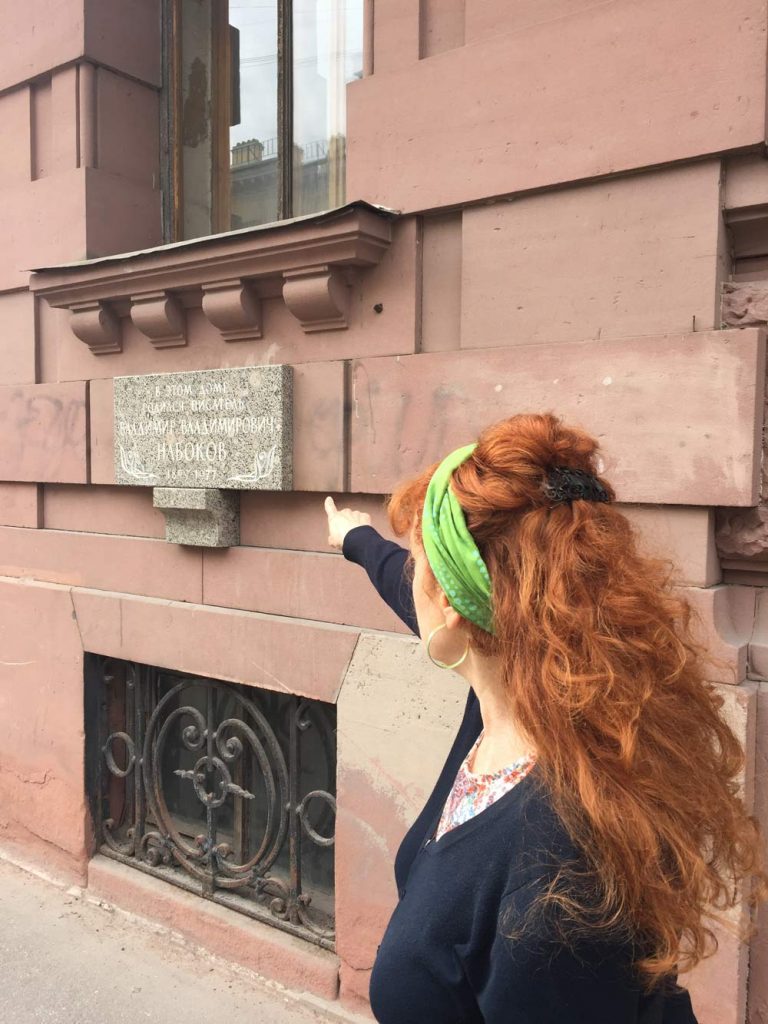 Back on the street and opposite Saint Isaac’s cathedral, Tamara spots the Lotte Hotel. She thinks it might be Korean. We ask and it is indeed Korean and we are invited in and given a special tour of the atrium dining room and up to the sixth floor (as yet unopened) and the roof terrace for a view over the canals and the cathedral.

We learn that John Quincy Adams, when ambassador to Russia, stayed in the building that is now the hotel, and that Gogol lived there. 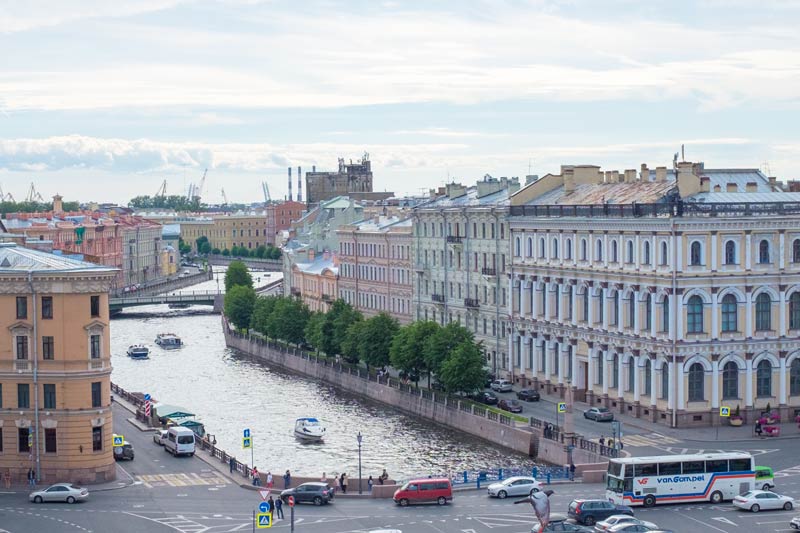 The next day we go to the Dostoyevsky Museum, which is really just his apartment. It is an ordinary apartment, not grand. His hat is there under a glass dome, and his desk and papers. There is one poignant object – a box (a matchbox?) on which his daughter had written ‘Papa died today.’

We learn that the Kazan Cathedral we had visited features in his novel ‘Crime and Punishment’.

And now, as they say, for something completely different: It’s things we noticed, things that caught our eye.

The first observation is that pigeons are very relaxed – obviously nobody bothers them. They move out of the way a few scant inches and continue their lives. Lots of people feed them as well.

Everywhere – on the street and even churches in front of religious icons – young and middle aged women pose for photos. They pose provocatively like sultry 1950s pinups – three-quarters to the camera, bust pushed forward, head back.

House sparrows are everywhere – lots and lots of them. House sparrow numbers in the UK have crashed and now we know where they are: They have immigrated to Russia.

We have seen several men – young and older – with a mouth half full of gold teeth.

Metro stations are spotless. The metro trains are squat, square, and utilitarian. The corridors down to the trains are finished in marble and clean as a pin.

The streets are swept regularly.

Couples on the street kiss deeply and amorously – not just a peck on the cheek.

There are quite a number of Central Asian people on the street – mostly men.

Trash bins just a couple of feet tall are every thirty yards along the main streets and emptied overnight.

In the courtyards, behind the facades of the buildings – even on Nevsky Prospect – the paintwork is peeling and buildings are more run down. How deep is the prosperity? There are a lot of expensive cars on the road – top of the range Audis, BMWs, and Mercedes.