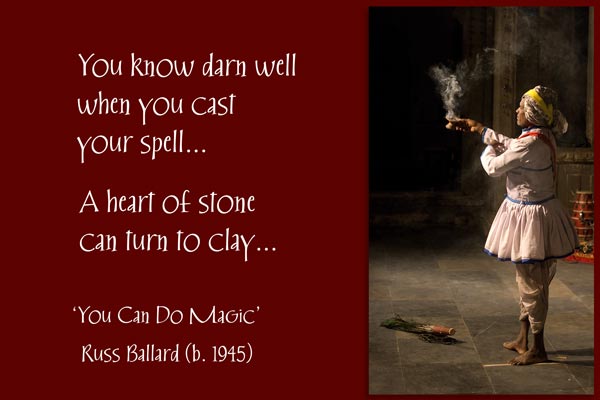 An element of love is the allure and enchantment of it all, which is why we featured this folk dancer in his exotic costume with eddies of smoke rising from his incense burner in the dark of the night in this ecard from our Valentine’s Day collection.

We photographed him when he was performing as part of a fabulous folk program that we saw in Udaipur in Rajasthan during our travels in northern India four years ago.

The essence of his appearance so conjured up the magic of love in our heads that we teamed up his image with lyrics about the particular spell that love casts.

A Special Day For Lovers, Courtesy Of Geoffrey Chaucer

Love will surely be in the air tomorrow when Valentine’s Day is celebrated.

But when you think about love all over the world, the question that came to my mind was this: How did Valentine’s Day come to be associated as a special day for lovers?

Actually, this Christian feast day that has pagan roots was not linked as a romantic day for couples until the 14th century.

According to the UCLA medieval scholar Henry Ansgar Kelly, author of Chaucer and the Cult of Saint Valentine, it was the 14th century poet Geoffrey Chaucer who first linked St. Valentine’s Day with such romance.

He did so when he composed his poem called Parlement of Foules (Parliament of Fowls in modern-day English).

It was the poetic tradition at that time to associate such an occasion with a feast day, and so in his poem of about 700 lines Chaucer linked the royal engagement in 1381 between England’s Richard II and Anne of Bohemia with the mating season of birds and with St. Valentine’s Day as a special day for couples with these two lines:

For this was on St. Valentine’s Day,
When every fowl cometh there to choose his mate.

This was the first reference to the notion of St. Valentine’s Day being a special day for lovers.

Another First, This Time For Love Poetry

Speaking of Chaucer and poetry, one can read lots of cooing about love for Valentine’s Day. And so I wondered: Quite apart from Valentine’s Day, what is the origin of love poetry?

It turns out that it comes courtesy of the same people who in around 3500 B.C. invented writing: Archaeologists claim that the oldest surviving love poem is Sumerian. Written on a clay tablet, the poem is believed to have been recited by a bride of King Shu-Sin who ruled Sumeria during the 3rd century B.C.

Archaeologists called the poem Istanbul #2461 (so much for romance, eh?), and it starts like this:

Our Valentine’s Day ecards at Quillcards include images with partial quotations from love poetry. We also feature quotations that are the complete sayings, i.e. they are not taken from a longer poem.

What follows here are some of these ecards.

And in honor of the amorous and affectionate spirit of Valentine’s Day and to get the full sweep of meaning of the writers’ poems – when we focus in this article on a card with a partial quotation from a longer poem, we will include the complete poem from which it was taken.

With a tip of the hat to Chaucer as he was the first to pair Valentine’s Day with romantic couples, here is our photo of the castle folly in Roundhay Park in Leeds, West Yorkshire in England. 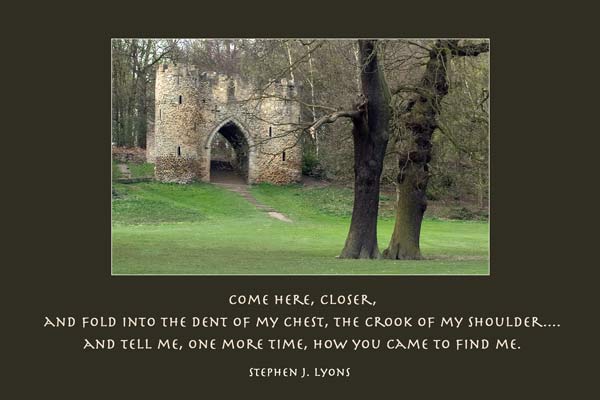 One of the biggest city parks in Europe, Roundhay Park has more than 700 acres (284 hectares) of parkland, lakes, woodland and gardens that are now owned by Leeds City Council.

It’s a wonderful park, and one that David and I loved to go to when we lived in Leeds. Royalty owned it until 1872 when Prince Arthur solemnly reopened it as a public park for all people.

So it figures that that this castle folly is on the park grounds. Especially popular on 18th century estates, follies were created to represent mythical, classical, or medieval buildings and places and they also gave the wealthy landlord a way of displaying just how rich he was.

We were taken by the romantic Arthurian (as in King Arthur, that is) look of the place and we chose a quotation from this poem called Remembering by Stephen J. Lyons:

Come here, closer, and fold
into the dent of my chest,
the crook of my shoulder.
In the open window the
candle betrays the wind’s
summer breath and the
night settles down around us.

Don’t move, not now,
let’s be still, hold this moment
before we open our bodies,
and tell me, one more time,
how you came to find me.

A very different image from the stone edifice of that folly is modern sketch of ours of a female face with eyes downcast with a bit of a tinge of color in her cheeks and lips. 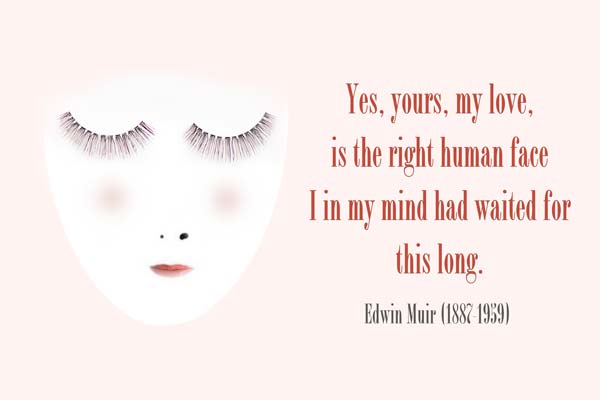 Here’s the original poem by Edwin Muir from which we took the featured quotation:

THE CONFIRMATION by EDWIN MUIR

Yes, yours, my love, is the right human face.
I in my mind had waited for this long,
Seeing the false and searching for the true,
Then found you as a traveller finds a place
Of welcome suddenly amid the wrong
Valleys and rocks and twisting roads. But you,
What shall I call you? A fountain in a waste,
A well of water in a country dry,
Or anything that’s honest and good, an eye
That makes the whole world seem bright. Your open heart,
Simple with giving, gives the primal deed,
The first good world, the blossom, the blowing seed,
The hearth, the steadfast land, the wandering sea.
Not beautiful or rare in every part.
But like yourself, as they were meant to be.

Short But Ever Sweet

Some of our Valentine’s Day cards have short romantic sayings that are complete in themselves: They are ‘feng shui’ types of tiny mini poems, if you get my drift.

Here are three examples of the number we have on offer, beginning with this 11-word saying from the Holy Book of the Sikhs that we have paired with a photograph that we took in Venice: 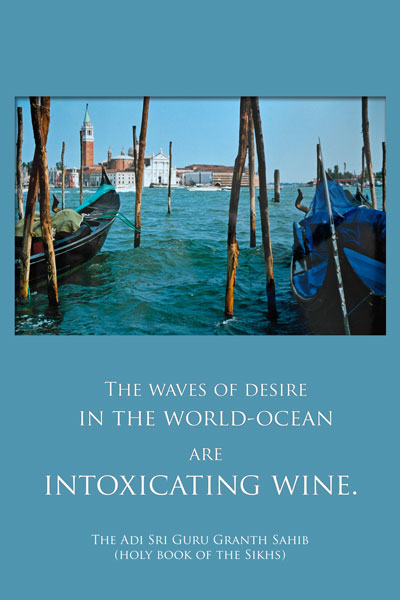 This is a second example, a quotation (unfortunately anonymous) that I think packs a wallop into only nine words: 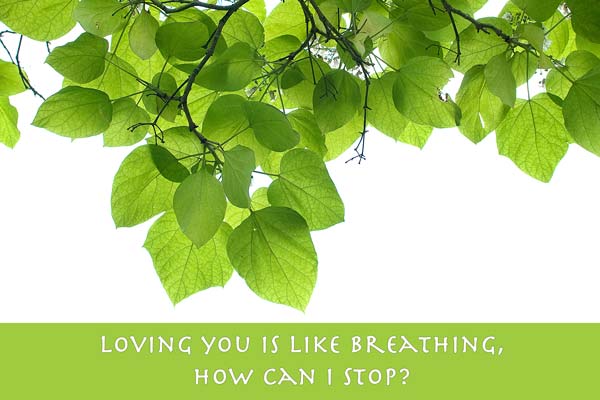 And here’s the third example, a delightful comment that the actress Ingrid Bergman made about what a kiss is that we have put with our sketch of a couple drawn on two lisianthus flowers: 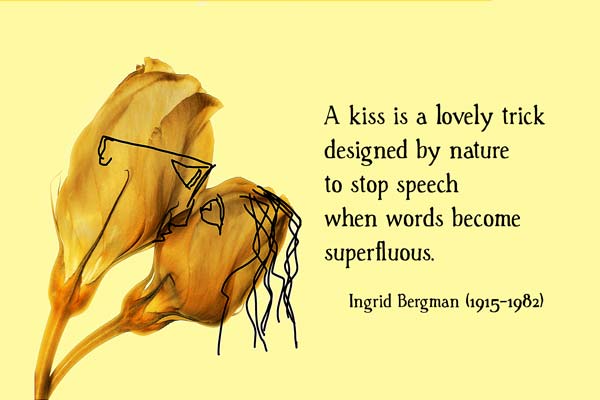 The Bard, Of Course

Words of love in the English language owe a delicious debt to William Shakespeare, of course.

Put alongside a photo that we took of the old town center of Dijon, France, the quotation is taken from his play Henry V: 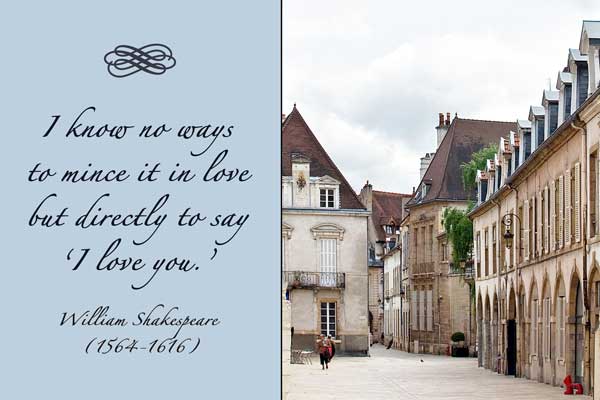 Speaking of love and Will, I found this quotation in a sweet little volume from The Arden Shakespeare series called Book Of Quotations On Love. Compiled by Jane Armstrong and published by Thomson Learning, I bought it at the bookstore of the marvellous Shakespeare’s Globe Theatre in London which describes itself in its website as being “a unique international resource dedicated to the exploration of Shakespeare’s work and the playhouse for which he wrote, through the connected means of performance and education.”

An Homage To Rock

Middle-aged that we are, this card above from our Valentine’s Day collection features an evocative quotation from the Cream’s song ‘The Sunshine Of Your Love’, an old favorite song of ours.

We’ve also inserted a hint that it’s an old memory of ours by coupling it with a sepia-toned version of a photo that we took on a street in London: 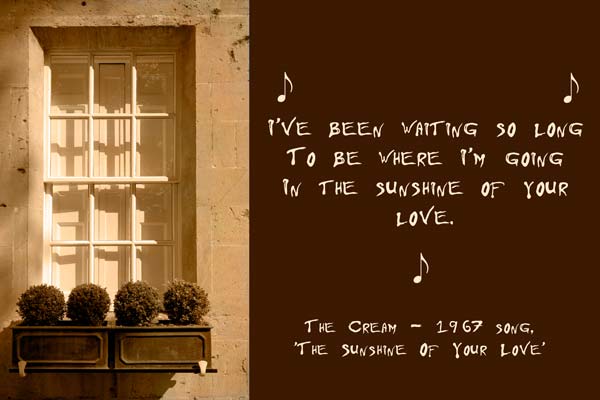 The Chilean poet-diplomat Pablo Neruda led a life suffused with poetic and political activity, a prolific writer who also won the Nobel Prize for Literature in 1971.

Neruda’s astonishing love poems read equally well in translation from the Spanish, like this Love Poem XIV from his ’20 Love Poems And A Song Of Despair’ translated here by W.S. Merwin:

Every day you play with the light of the universe.
Subtle visitor, you arrive in the flower and the water.
You are more than this white head that I hold tightly
as a cluster of fruit, every day, between my hands.

You are like nobody since I love you.
Let me spread you out among yellow garlands.
Who writes your name in letters of smoke among the stars of the south?
Oh let me remember you as you were before you existed.

Suddenly the wind howls and bangs at my shut window.
The sky is a net crammed with shadowy fish.
Here all the winds let go sooner or later, all of them.
The rain takes off her clothes.

The birds go by, fleeing.
The wind. The wind.
I can contend only against the power of men.
The storm whirls dark leaves
and turns loose all the boats that were moored last night to the sky.

You are here. Oh, you do not run away.
You will answer me to the last cry.
Cling to me as though you were frightened.
Even so, at one time a strange shadow ran through your eyes.

Now, now too, little one, you bring me honeysuckle,
and even your breasts smell of it.
While the sad wind goes slaughtering butterflies
I love you, and my happiness bites the plum of your mouth.

How you must have suffered getting accustomed to me,
my savage, solitary soul, my name that sends them all running.
So many times we have seen the morning star burn, kissing our eyes,
and over our heads the gray light unwind in turning fans.

My words rained over you, stroking you.
A long time I have loved the sunned mother-of-pearl of your body.
I go so far as to think that you own the universe.
I will bring you happy flowers from the mountains, bluebells,
dark hazels, and rustic baskets of kisses.
I want to do with you what spring does with the cherry trees. 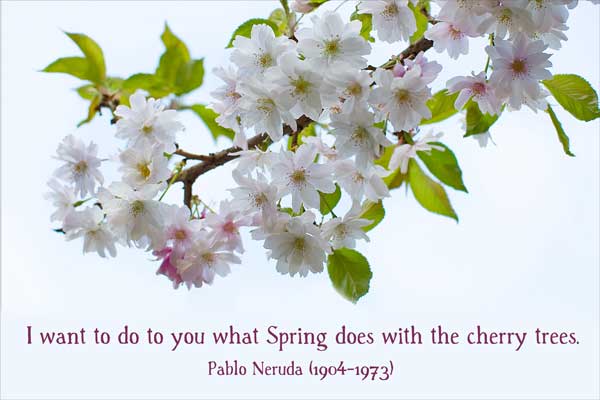 As you can see, we have teamed up those jaw-dropping, sizzling final two lines of Neruda’s poem with our photo of a branch of sunshine-soaked cherry blossoms.

Writing this right before Valentine’s Day in the depths of winter as I am here in Edinburgh so north in the UK, those divine final lines of Neruda’s writing and the vision of those sprightly cherry blossoms are such a much-needed tonic.