Hunted to Near Extinction
Red kites are one of the United Kingdom success stories of the past twenty years, but they were hunted almost to extinction in the nineteenth century, with just a few birds left in the wild in Wales. 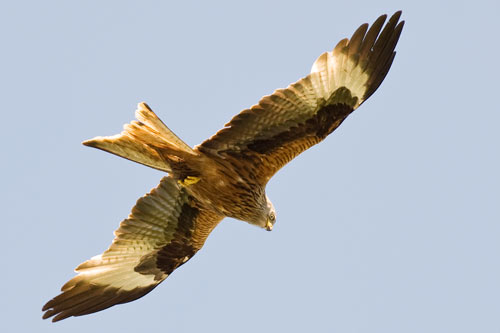 They were reintroduced into the UK 1989 at the initiative of the Joint Nature Conservation Committee (JNCC) which is the statutory advisor to the Government on UK and international nature conservation.

The JNCC worked together with the Royal Society for the Protection of Birds (RSPB) and English Nature (now replaced with a body called Natural England).

The reason I mention it is that the decision to reintroduce red kites was not just a matter of a conservation body rearing and releasing a few birds, but was considered at government level against the backdrop of what was in the best interests of nature conservation in the UK and to honor Britain’s international treaty obligations concerning wildlife.

The reintroduction of red kites has been very successful but they are still on the ‘amber’ watch list for endangered birds.

The risk is not from environmental factors, but from people. The Wildlife and Countryside Act 1981 makes it an offence to take, injure or kill a red kite or to take, damage or destroy its nest, eggs or young. But just in May of this year the BBC reported that the illegal poisoning of a red kite in the Yorkshire Dales was being investigated by police. It had eaten bait laced with the pesticide alphachloralose, which is often used illegally as a pest control.

Red Kite Facts
The wingspan of a red kite can be as much as five or six feet (nearly two metres), but amazingly their bodies weigh just two or three pounds (less than one and half kilos). That enables them to circle around effortlessly on thermals for hours eyeing the air and the ground looking for prey. 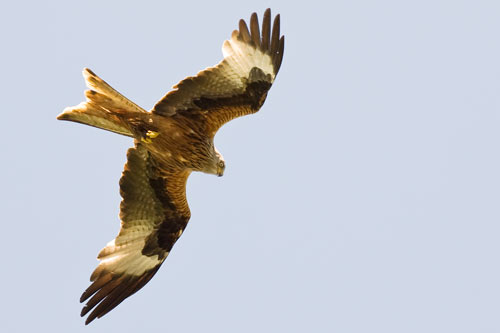 They are not fast flyers and they are not built for overtaking birds in the air. But they can change direction quickly and catch an inexperienced juvenile crow in mid-air.

They also hunt rabbits, rats, mice, other small animals. And they eat invertebrates such as earthworms, which paints a strange picture when one imagines those claws and that beak being used to hunt a worm.

They eat carrion as well, and in the Middle Ages they were common in towns, cleaning up the streets. And for that reason they were protected. But in the eighteenth and nineteenth centuries they began to be seen as pests – hence their near extinction.

Kites have very good eyesight and when they see something that interests them, or they want to lose height, they fold their wings and swoop down, like in this series of photographs I took a few weeks ago at Harewood, a small village that surrounds a country estate near Leeds in Yorkshire.

Red kites were introduced here in 1999 and there are now quite a number of them in the area. I have seen as many as a dozen at one time, dotted about the wide expanse of sky, some just dots high in the air as they ride the thermals.

About The Photographs
These shots are crops from the central area of the series of photographs I took. I shot them with a long lens (70-200mm) but the birds were still small in the viewfinder.

I have seen red kites perch in the high branches of trees at Harewood, and one day I hope to see a red kite in a tree and have a camera with me. It always seems to be one or the other.