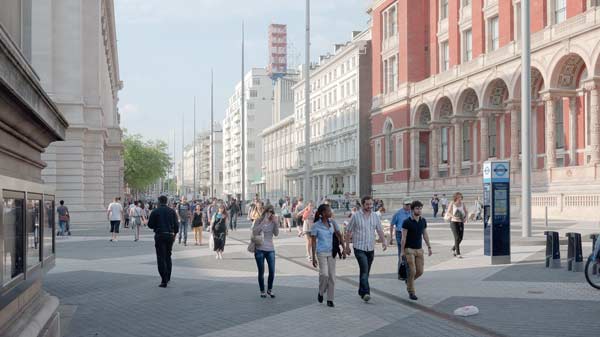 The Calm Before The [Diamond Jubilee] Storm

It felt a bit like the calm before the storm last week when my husband David and I visited London seeing as it was the run-up to the five days of festivities this week for Elizabeth II’s Diamond Jubilee to celebrate her sixty years on the throne.

Although things were revving up somewhat and you saw emerging telltale signs that the city was in store for something special, the merrymaking hadn’t officially begun. So what we saw on the streets was low on the razzle-dazzle scale compared to all the jubilee pageantry and spectacle that we have all witnessed this week.

Nevertheless I think London is always full of bits and bobs that are grand to come upon and learn more about, including what follows here.

There he was, luring my husband David and I with his bright colors in a shop window – and no doubt you’ve also seen this commanding fellow either in person or in print:

He’s the character Punch who is part of the Punch and Judy duo, a traditional English popular puppet show.

Other characters pop up on stage along with Punch and Judy – which invariably leads to a bit of an anarchic, thespian free-for-all that gets the spectators laughing. 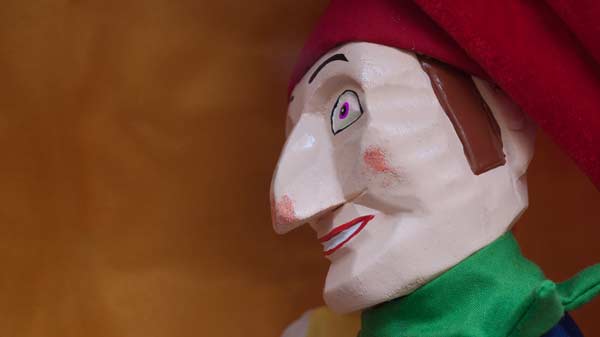 It turns out that traditionally the single puppeteer who performs the show was known as a ‘professor’ or ‘punchman’ in Victorian times – which is, of course, where our hero Punch here gets his name.

A punchman was sometimes helped out by a ‘bottler’ – that is, the name given to the person who tries to corral an audience, introduces the show, and finally collects the money (‘the bottle’) at the end of the performance.

The bottler would often play accompanying music (in Victorian times the drum and pan pipes were generally used) or do sound effects or chat back to the puppets. The latter often consisted of repeating lines the puppets said that might have been difficult for the audience to understand.

These days punchmen usually work on their own because they often get gigs at private parties or public engagements so they are paid beforehand and not busking on the streets.

Pulcinella to Punchinello to Punch

Punch and Judy have their roots in the commedia dell’arte of 16th-century Italy, a form of theatre with masked ‘types’.

Commedia dell’arte had many actors and players who commanded high fees – which is what led in the 17th century to bringing in string puppets (known as marionettes) who replaced the actors.

Punch’s figure is taken from the Neapolitan character Pulcinella, which was later anglicised to Punchinello. He’s fashioned after the mythological Lord of Misrule, and originally his wife was named Joan.

Mr. Punch as he was also known first appeared in England in 1662. Samuel Pepys, the English naval administrator and Member of Parliament who became known for his diary, wrote about the marionette show that had an early version of the Punch character that he saw in Covent Garden in London.

The marionette theatre starring Punch was at its height in the early 18th century. Punch was very well liked in Paris too, and by the end of the 18th century he was also performing in Britain’s American colonies where George Washington is said to have bought tickets for a show.

From Marionettes To Glove Puppets

During that time, marionette companies began to be replaced by glove-puppet shows.

This is when the punchman and his assistant bottler appeared on the scene. Mobile puppet booths at that time and into the early 19th century were covered in checked material or other inexpensive cloth.

Learning about the history of Punch and Judy and their beginnings as marionettes reminds me of these marionettes that David and I chanced upon them when we traveled in northern India in 2010.

They are iconic in the gloriously colored Indian city of Udaipur that lies in the magnificent region of Rajasthan (and by the way, I was so taken with the puppets that I bought several of them home with us):

Back from Udaipur to London: Seeing that almost everyone including myself is usually reliant on a mobile/cell phone these days, it was a treat for us to spot this working iconic red phone box when we were walking about the city streets of inner London. 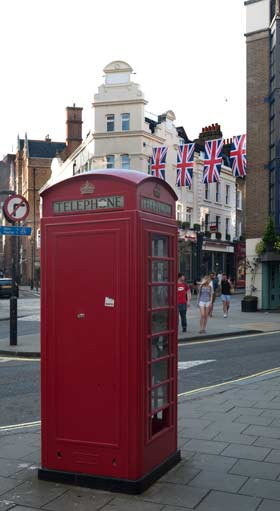 So what does this phone box, the Liverpool Cathedral, and the Battersea Power Station all have in common?

Each was designed by Sir Giles Gilbert Scott who lived from 1880 to 1960. Born into a family of architects, Sir Gilbert Scott was noted for his style that blended Gothic tradition with modernism.

He built a number of churches, and during WWI when he was a major in the Royal Marines, he was put in charge of building sea defenses on the English Channel coast.

Scott’s early life was not a bed of roses: When he was three, his father was declared mentally unstable and he only saw his father twice in his life after that.

He grew up instead just with his mother. One of the type of outings that affected him was when they went ‘steeple-chasing’ together during his school holidays – in other words, they would bicycle around Sussex near the farm where they lived hoping to find interesting church architecture.

The Telephone Box With A Top Like A Mausoleum Dome

Beyond building churches during his career, Scott was one of three architects invited by the Royal Fine Arts Commission to present designs for new telephone boxes.

Scott got this invitation at the same time that he was made a trustee of Sir John Soane’s Museum (now known as the Soane Museum). Surely this influenced him to top his design that was in a classical style with a dome that is similar to Soane’s self-designed mausoleums in St Pancras’ Old Churchyard and Dulwich Picture Gallery in London.

Scott suggested that his telephone box be made of steel and be painted silver with a greeny-blue interior.

The Post Office, however, decided to make Scott’s winning design in cast iron and to paint it red so it would be very visible to all.

Different reincarnations of the telephone boxes were numbered. And speaking of Elizabeth’s Diamond Jubilee this week, it was in 1935 that K6 (box number 6) was designed to commemorate her father King George V’s silver jubilee.

The K6 was the public telephone box that has been used the most in the UK.

When Queen Elizabeth came to the throne in 1952 sixty years ago, she wanted to change from the practice of using the purely symbolic ‘Tudor Crown’ as a symbol of her government.

Instead she decided to use a representation of the St. Edward’s Crown, which is the actual crown generally used for British coronations.

Living in lovely Edinburgh as we are, I want to note that the post office in Scotland at this time decided to use a representation of the actual ‘Crown of Scotland’, the crown used at the coronation of the Scottish monarchs.

Union Jacks At The Ready

As you will note, there are Union Jacks flying at the ready in the background of our photo of the iconic red telephone box – yielding two iconic images for the price of one, as it were…

At that time when the Diamond Jubilee was almost upon us, such flags were popping up all over London just like the rows of them on high in the rafters of this building at Covent Garden: 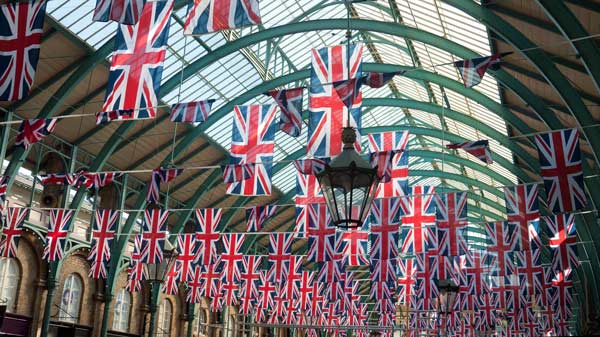 At the turn of the 17th century, a certain type of lightweight worsted wool fabric more commonly known as ‘tammy’ was used for making ribbons, flags, and signal flags for the Royal Navy.

Through a process known as hot pressing, the fabric acquired its high glaze. This and its other properties made it particularly suitable for creating such objects.

Fabric, Plastic, Paper, Or Even Cardboard

In modern times, the term “bunting” is used for any festive decorations made of fabric, plastic, paper or even cardboard in imitation of fabric.

Typical forms of bunting are strings of triangular flags in vibrant colors, or long pieces of fabric in the colors that make up a national flag gathered and draped into various shapes.

Bunting is also used to talk about a collection of flags on a ship. The officer who raises such signals using flags is known as ‘bunts’, which is why the term is still used for a ship’s communications officer.

Certain flags like Union Jacks pinned up for decoration as they have been for this jubilee period as also referred to collectively as bunting.

A ‘Bundle’ Of Decorations?

Interestingly, the word ‘bunting’ comes from ‘bunt’ which is the bellying part of a square sail, as the language site Edenics explains. However, the word ‘bunt’ in Middle Dutch means ‘a binding bundle’.

The pivotal function of ‘bunting’, it goes on to clarify, may be observed in the ‘buntline’, which is a rope to prevent a sail from bellying.

Well, that’s a bit of a stretch to all the bunting splashing so much vibrant color on jubilee decorations and street part tables, but I find it fun to discover where everyday items get their historical roots.

Queen Elizabeth Right There At The Pub’s Entrance

Speaking of decorations, we might not have been in London for the Diamond Jubilee – but at least we still got to say hello to the Queen.

As you can see here, she was standing outside the pub called the Woodins Shades on Liverpool Street when we walked by: 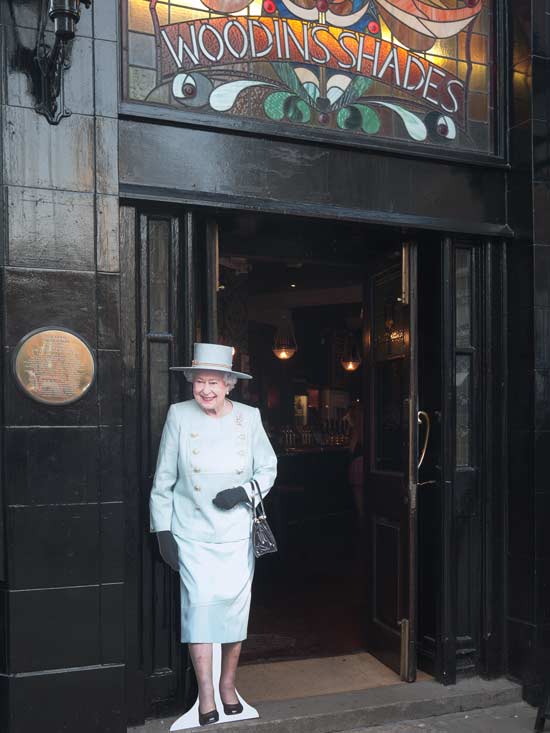 Actually, we thought it was quite nice for her to make such an effort – particularly with her jubilee coming up within days, the planning of which had been several years in the making!