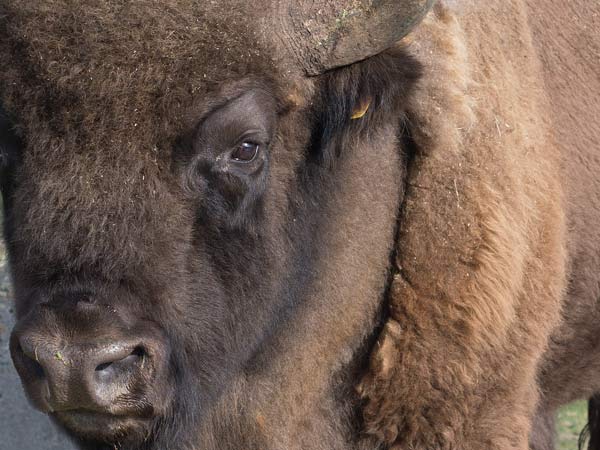 Bison (or buffalo as they are known in the United States) are of course an iconic animal of the American plains.

They are now reduced from the huge numbers there were before the opening up of the West.

Ah, the West and Westerns.

I’ve always been a fan of Westerns – even trashy TV Westerns that were really just soap operas.

Abandoned towns and the open space of ranges and deserts give characters settings in which to play out themes without the clutter and distraction of civilisation.

For me growing up, a good Western could be practically transcendent.

Westerns have helped me understand life, and I have a shorthand name for a certain kind of Western. I call it ‘The Retired Gunslinger’.

The film Shane was the first example I saw of it. For anyone who hasn’t seen the film, it’s about a former gunslinger (Shane) – a man who wants to put his past behind him.

He’s been drifting – full of sadness and regret over his former life. He tries to settle down working for a homesteader. Thing are complicated by the attraction the homesteader’s wife feels for him and the adoration that the young son feels for him.

Shane keeps acknowledging that the husband is the real hero, bringing up a family against the odds.

A local cattle baron wants to force the homesteaders to quit and move away from the valley. When the cattle baron’s men can’t beat Shane, a notorious gunslinger is called in to fight Shane.

Shane is reluctant to fight, but he is forced by his code to face down the gunslinger, and of course he wins.

But the gunfight has distanced him from the life he hoped to have in the valley.

So he rides off alone, and in the final scene we see the family he helped looking on after him with a mixture of feelings.

Ostensibly, that’s the story. But the real story is how it plays with us, the audience.

The film is an hour and a half long and we are waiting most of that time for the showdown. We would have been completely let down if the gunfight had been avoided.

The lesson that the homesteader choosing to lead an industrious and peaceful life is the real hero of the film, is a myth.

The real meat is in the gunfight.

And the storyline of the ‘retired gunslinger’ has been reprieved over and over again. Fairly recent examples being the 1985 film Pale Rider and 1992 film, Unforgiven – both Clint Eastwood films.

To Leave The Past Behind

Of course, it is not just Westerns that play on the retired gunslinger theme.

The theme was given a modern-day setting in David Cronenberg’s 2005 film ‘A History of Violence’.

It tells the story of a coffee shop owner in a small town whose violent past is uncovered.

The hero knows what he wants. He wants to hang on to the new life he has made for himself. The question is whether, now that his past is revealed, he will destroy his new life in the process.

The hero has to reluctantly return to violence, and we would be saddened if the hero lost his new life and family.

But would be cheated of the gladiatorial arena if the hero avoided resolving his problems violently.

Westerns and bison – I’ll be returning to them shortly. First though, a side-step to some other animals. 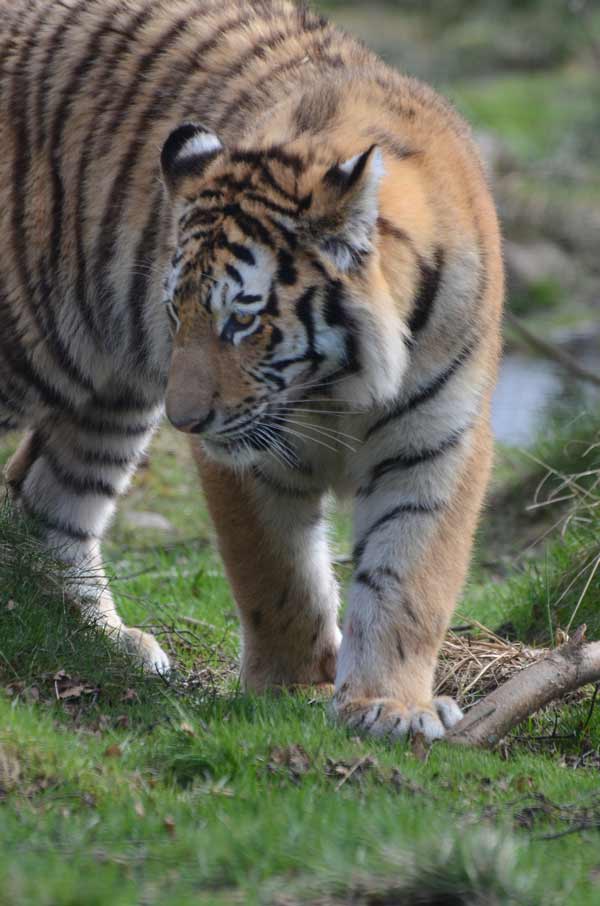 A few weeks ago, Tamara and I went to the Highland Wildlife Park in the Cairngorms here in Scotland.

Here is one of the more spectacular animals there – a Siberian tiger.

Or rather it was known as the Siberian tiger until the last of them disappeared from Siberia in the 1990s, and is now known as the Amur tiger.

For me it is still the Siberian tiger because it seems wrong to rob the animal of its name along with its habitat. Ah well… 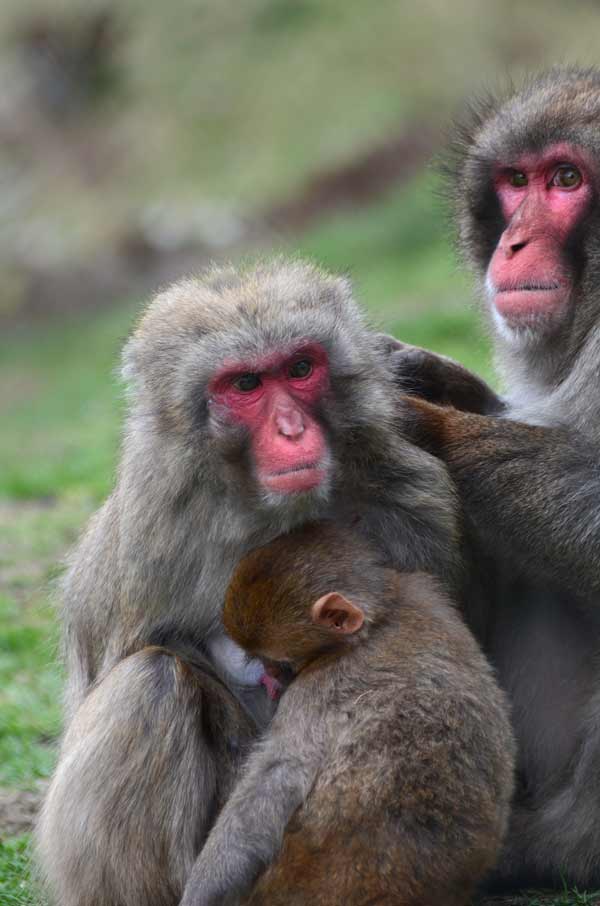 The Park is also home to a troop of Japanese macaques, otherwise known as Snow monkeys.

They live all over Japan, and because the climate there can be anything from freezing to sub-tropical, they have learned to adapt to a wide range of temperatures.

You may have seen photos of them bathing in hot springs in Japan.

Bison In The Highland Wildlife Park 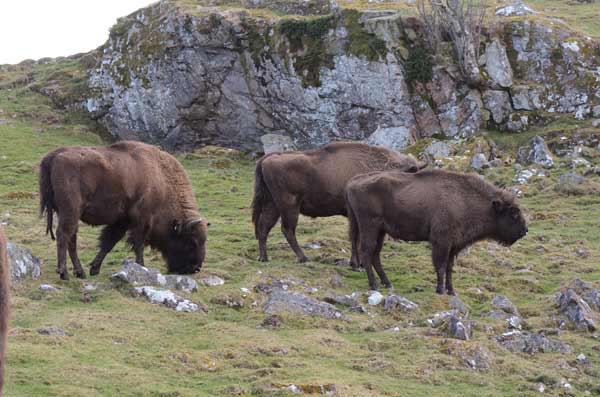 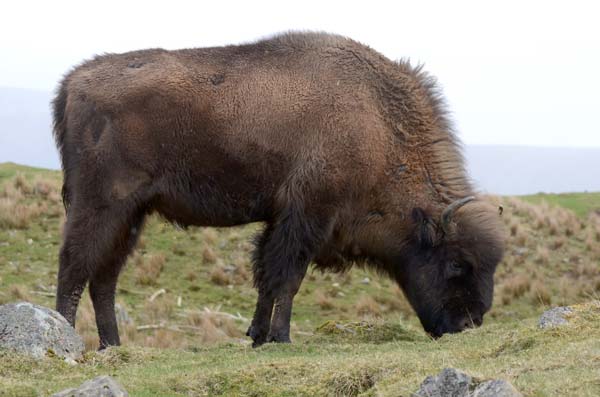 Which leads me back to where I started, because the the Park is home to a herd of bison.

I watched the bison eating and they seemed to be nibbling the grass, but it was difficult to tell from a distance.

The warden at the park didn’t know but he texted me later to say that the consensus among the staff was that bison twist and pull the grass to eat it.

The reason I wanted to know how bison eat is because of something that Westerns taught me, which is that there were powerful forces at play in the opening up of the West.

The coming of the railroad, the fencing in of the open ranges, agriculture, cattle ranching, and that notorious animal – the sheep.

The range wars between cattle ranchers and sheep ranchers was a war of survival because of the difference in the way that cows and sheep eat.

Cattle twist their tongues around grass and pull and tear it to eat it. Sheep, on the other hand, simply nibble grass.

The problem is that sheep will nibble grass to a fine sward. That means is that whilst sheep can eat where cattle have grazed, cattle can’t eat the grass where sheep have been.

At least they can eat until the grass grows long enough again for them to wrap their tongues around.

So the cattle ranchers saw the sheep ranchers as enemies, robbing their cattle of land upon which to graze.

So when I saw the bison at the Highland Wildlife Park, I had to know whether they nibbled or whether they twist and pull the grass to eat it.

After all, if they nibbled, then that would have been another reason for wiping out the herds to make way for cattle.

But no, the herds of buffalo / bison were wiped out for other reasons.

How Do They Get So Big?

Like cattle, bison fill their stomachs and then go off to ruminate. That is, they regurgitate the grass and re-digest it to get the maximum nutrition out of it.

Despite this capacity for re-digesting food, it amazes Tamara that animals like the bison can grow so big on a diet of grass.

And I have to say, grass + calf = bison hardly seems possible, does it? 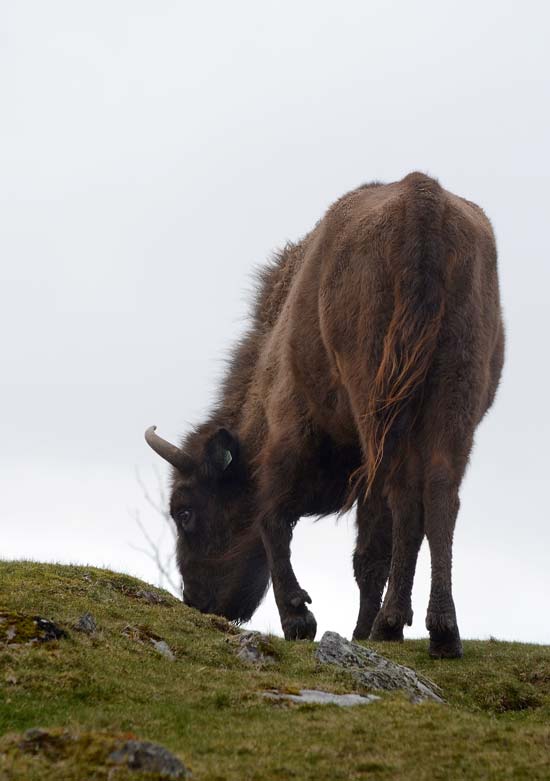 Oystercatcher In The Car Park

As a final note, this oystercatcher was nesting in the car park of the Highland Wildlife Park. There were cars and people passing by all around it and it just sat patiently.

The park ranger told me that it was now the fourth year that it had returned to the same spot to hatch its young. 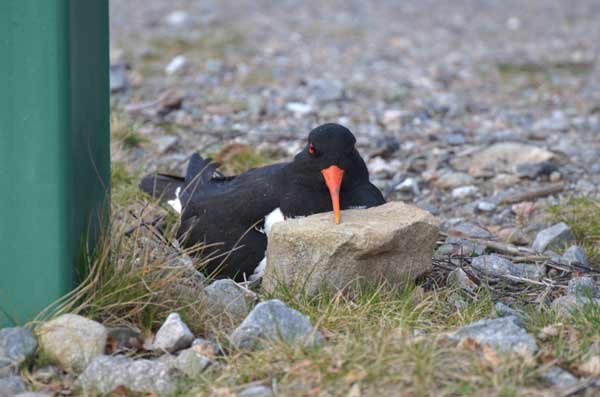