Finally Seeing Inside The Abbey

On the several occasions that I have visited Bath, I have looked to see whether Bath Abbey was open, but it never seemed to be.

So when I was passing one morning recently and saw that the great wooden doors were open, I grabbed the chance and went inside.

Bath Abbey doesn’t look very big or grand from the outside. It is right in the center of Bath – surrounded by shops, the Roman Baths, the Pump Room restaurant and offices.

Therefore, I already had an impression in my mind of what the inside would probably look like.

So I was very surprised when I went inside to see elegant columns rising high up to the ceiling and wonderfully delicate stone fan vaulting running down the length of the nave.

I’ve seen fan vaulting before, but I don’t recall seeing anything so fine and detailed before. 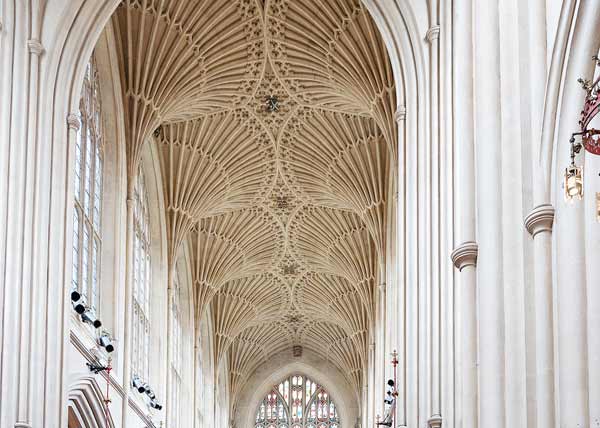 It was developed in about 1400 AD in the architectural style that is now known as Perpendicular Gothic, which is easy to recognise with its tall, slender columns and large windows with elaborately curved and intricate stonework separating the window panes.

Fan vaulting is like the cherry on the top of cake of the other elements.

To put the style in its historical context – it originated at the time of Chaucer’s Canterbury Tales, which was less than a generation after the Black Death had wiped out about half the population of England.

Of Abbeys, Abbots, and Abbesses

Bath Abbey, or to give it its full title, the Abbey Church of Saint Peter and Saint Paul, Bath, is an Anglican parish church.

The words abbey, abbot, and abbess all come from the Aramaic word abba, which means father – and abbeys and monasteries are Catholic institutions.

I wondered, therefore, why an Anglican parish church – part of the Protestant Church of England – was called an abbey.

It turns out that it is because the word abbey is used – at least in England – to refer not only to Catholic abbeys and monasteries, but also to a religious building that is no longer in the Catholic tradition.

I have always wondered why Westminster Abbey in London is called an abbey when it is a church of the Church Of England. Now I know that the word has been taken over and adopted by the Church of England.

When I look at the complexity and sophistication of the design and the competence of the work in Bath Abbey it makes me re-evaluate the life and times of the 1500s when this building was built. 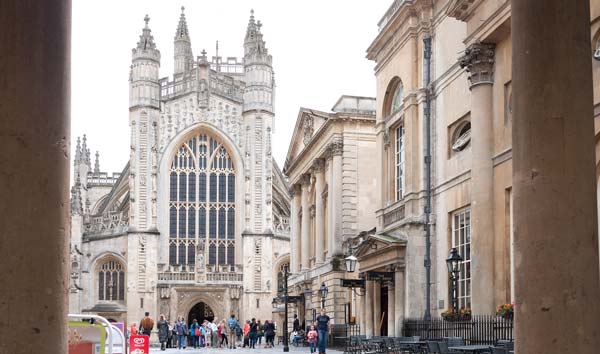 All this made me wonder what the difference is between a monastery and an abbey. And I learned that both are places where an order of monks or nuns live, so the words are to some degree interchangeable.

The word abbey on the other hand implies something higher up the pecking order.

In The Middle Of Town

As you can see from this photograph, Bath Abbey is right in the middle of the town of Bath, with shops all around.

Why Is There An Abbey In Bath?

Bath is quite a small place; so why is there an abbey there at all? The answer might be because of the famous thermal hot spring at Bath, which made it the center of a thriving population as long ago as the Roman occupation of England.

Even today the Roman Baths in Bath are the most fourth most visited tourist destination in Britain after the Tower of London, St. Paul’s Cathedral, and Westminster Abbey.

The Roman Baths even come in ahead of Stonehenge as a visitor attraction, with well over one million visitors a year.

That’s a lot of visitors for a place like Bath with a population of just 84,000.

After The Romans Left

After the Romans left in about 400 AD, Christianity came to Britain and a monastery was built on the site where Bath Abbey now stands.

Then the Normans invaded (in 1066) and some time later the local Bishop transferred his throne to Bath and founded Bath Cathedral.

But later bishops preferred the small town of Wells that even today has a population of only 10,000. So when the bishop moved his throne or seat to Wells, the former cathedral at Bath fell into disuse.

Four hundred years later, Bath cathedral was a ruin and in 1499 the bishop of the time ordered an abbey to be built on the spot.

The abbey was lucky to survive Henry VIII’s very public falling out with the Catholic Church in Rome.

That dispute led to the dissolution of the monasteries and abbeys, with many of them stripped of their assets and in some cases destroyed.

However, while Henry VIII fell out with the Church in Rome he did not fall out with Catholicism, and it wasn’t until Elizabeth I’s reign that Catholicism gave way to Protestantism as the official religion of England.

In any event, Bath Abbey survived the interruption to its building work by Henry VIII, and was finally completed in 1611.

Two hundred years for the building of an abbey – I can’t think of any building in more recent times that has taken so long to complete.

Perhaps Gaudi’s still unfinished Sagrada Familia in Barcelona – started in 1882 – is the nearest modern equivalent. If you know of others, please do add a comment below.

Every inch of the walls within the abbey seems to be covered with memorial plaques. I noticed that there were many plaques in memory of gentlemen who had lived in London.

I also saw plaques to governors of islands in the Caribbean, career soldiers, and politicians. 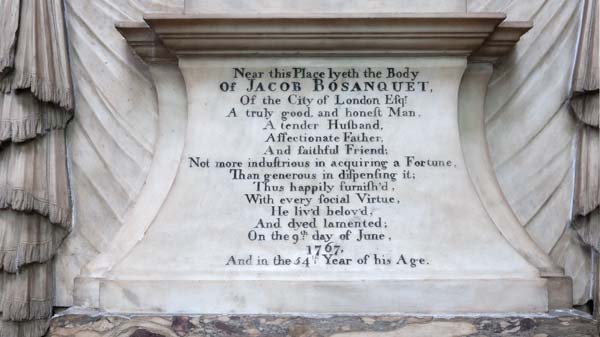 Among the plaques, this one appealed to me because of the wording on the plaque, which reads:

Near this Place lyeth the Body
of JACOB BOSANQUET
Of the City of London Esq:
A truly good, and honest Man,
A tender Husband,
Affectionate Father,
And faithful Friend;
Not more industrious in acquiring a Fortune,
Than generous in dispensing it;
Thus happily furnished,
With every social Virtue,
He lived beloved,
and died lamented;
On the 9th of June,
1767,
And in the 54th Year of his Age.

An American Buried In Bath Abbey

William Bingham, who was the delegate for Pennsylvania to the Continental Congress shortly after the revolutionary war and later a United States Senator, died in 1804 and is buried in Bath Abbey.

He made his money raiding British ships during the revolutionary war and later he became a land developer in New York State. The town of Binghampton and Binghampton university in the state of New York are named after him.

The reason he is buried in Bath is that after his wife died, he moved to England to be with his daughter Anna Louisa and her husband Alexander Baring, 1st Baron Ashburton.

Alexander Baring was part of the family that founded Barings Bank. The bank grew and grew, and during the Second World War it acted as the agent of the British Government in the sale of Britain’s assets in the United States.

The war was costly for Britain and the sale of its American assets was to raise cash to pay for Britain’s war effort.

All that good fortune came to a halt in 1995 when Barings Bank collapsed after Nick Leeson, one of the bank’s derivatives traders in Singapore, lost over one billion dollars of the bank’s money in speculative trading.

You may have seen the film ‘Rogue Trader’ starring Ewan McGregor as Nick Leeson, that dramatises how that happened.

So there we have it – an American buried in Bath Abbey.

I think what strikes me most is that a man who was a U.S. senator in the newly independent U.S. felt comfortable enough with the thought of living in England that he decides to spend his last years there.

Did things just return to normality and carry on as before?

It makes me wonder what the relationship was between the two countries in the decades after independence. 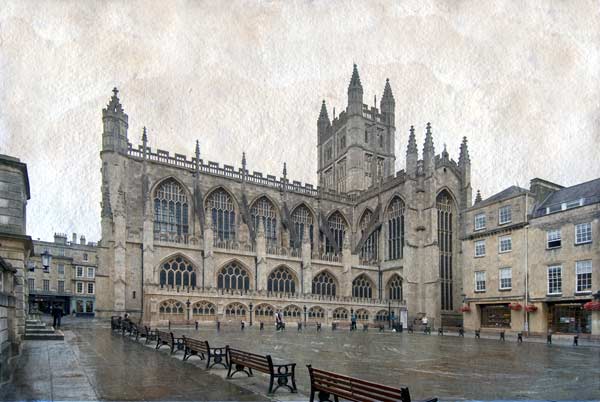